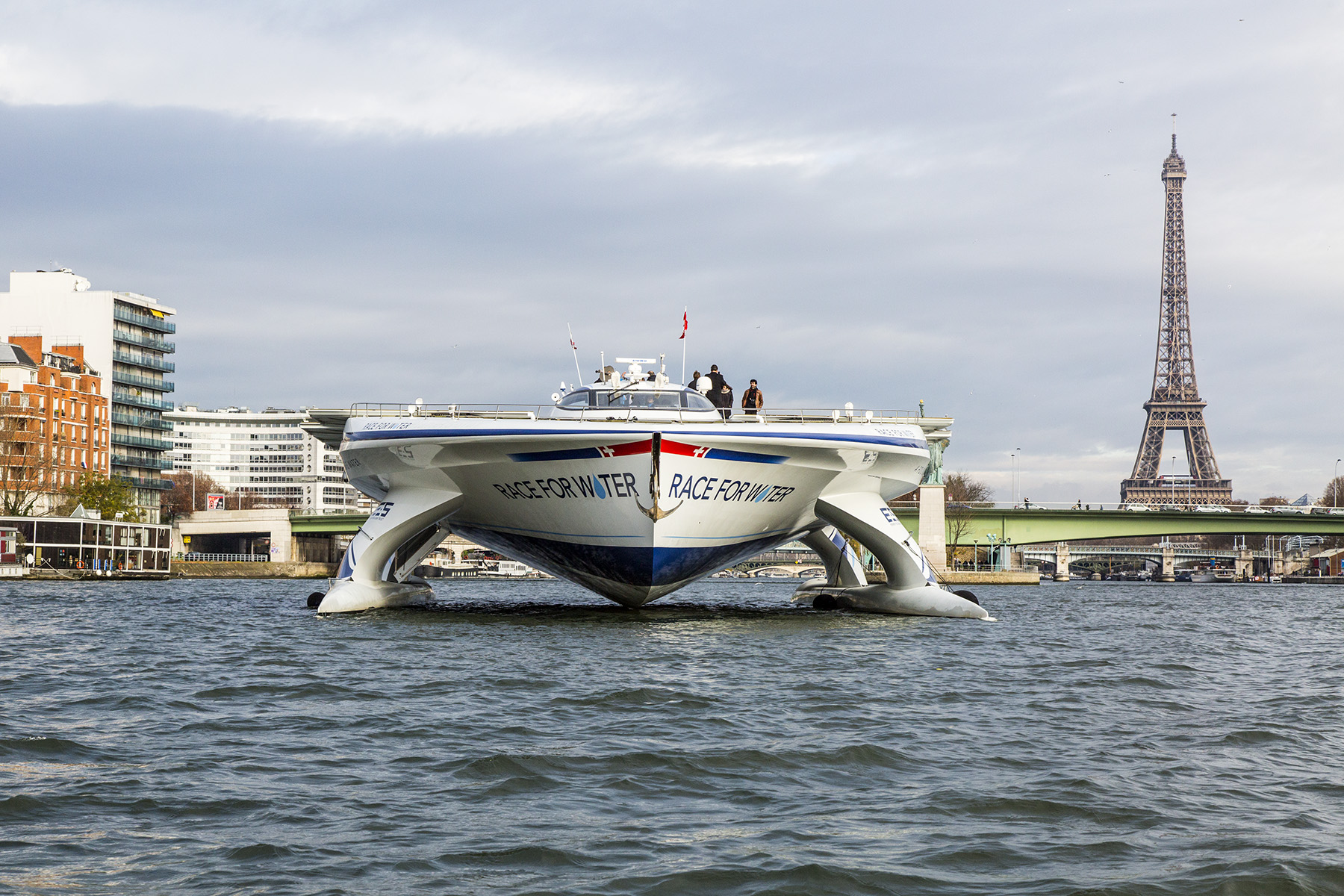 Race for Water Foundation concluded last Sunday its visit to the City of Lights where it presented its solutions programme against plastic water pollution at Le Bourget, the Grand Palais and aboard the largest solar-powered vessel in the world, named Race for Water. The Foundation also introduced two distinguished new ambassadors: Tony Estanguet and Gérard d’Aboville. Race for Water solar vessel is now heading towards Lorient (France), where she will start her 2016 campaign.

Race for Water Foundation representatives have been in Paris since the 25 November with the ambassador vessel, taking part in a multitude of events and conferences throughout COP21. At Le Bourget (in the Blue Zone as well as in the Climate Generation area), at the Grand Palais and aboard its solar vessel, the foundation successfully gave the oceans of the globe a voice. These conferences, placed under the label of solutions, were indeed very successful and allowed to bring the message of the urgency to act to preserve our oceans. The Foundation also inaugurated the “Plastic Pollution: from impact to solutions” exhibition on board the Foundation’s flagship, displaying its solutions programme and pilot projects to be launched from 2016 on.

Give plastic waste a value

Inspired by the principles of social entrepreneurship, the foundation plans to prevent waste from entering the waterways by giving it a value through an innovative technology that transforms waste into electricity. This model generates social, environmental and economic benefits and several coastal cities are already interested to implement it as of next year. Throughout the implementation of the solutions programme, the solar ship will serve as a versatile platform, as president of the Foundation, Marco Simeoni explains:

“Race for Water is an amazing tool to attract public and media attention to our cause and our message. It is a very versatile vessel which allows the Foundation to present innovative solutions that give end of life plastic a value, to raise awareness, and to host scientists studying plastic pollution in the marine environment. She is therefore an exceptional scientific and communication platform for the foundation, a unique tool to shine a spotlight on the cause."

During its stay in Paris, the Foundation also presented the ‘Collector’, a prototype boat that can collect macro waste in bays, lakes and rivers. It was developed by MOD SA and the Naval Industrie Lorientaise boatyard on behalf of Race for Water Foundation and has a cleaning capacity of 5,000m2 per hour with a yield of 500kg/hour. Waste absorbed at the front of the vessel travels to deck level on a conveyor belt before being stored in containers. Portable and versatile, the ‘Collector’ meets the needs of the community and the cleaning companies no matter the expanse of water. This vessel contributes greatly to the pioneering solutions the Race for Water Foundation wants to action in 2016.

With COP21 in its wake, the solar ship Race for Water is currently en route to Lorient in Brittany where she is expected to arrive before Christmas. The flagship will be based there until the 2016 campaign to implement pilot projects that counter plastic pollution, starting from March 2016.