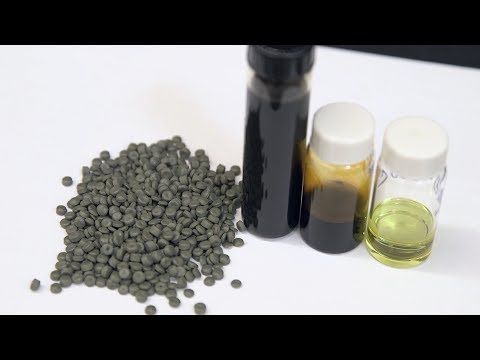 The United Nations estimates that more than 8 million tons of plastics flow into the oceans each year. A new chemical conversion process could transform the world’s polyolefin waste, a form of plastic, into useful products, such as clean fuels and other items. 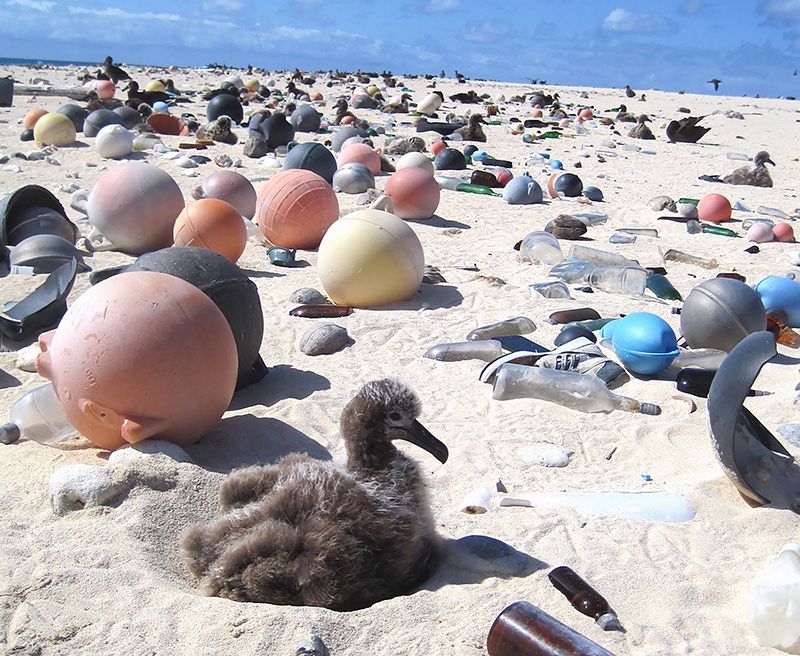 An albatross chick sits along a white sand beach at the Midway Atoll Wildlife Refuge amid plastic that covers the area even though it is not inhabited by humans. It is evidence of a global plastic problem. A new chemical conversion process developed by Purdue University researchers could transform the world’s polyolefin waste, a form of plastic, into useful products, such as clean fuels and other items. (NOAA photo)

“Our strategy is to create a driving force for recycling by converting polyolefin waste into a wide range of valuable products, including polymers, naphtha (a mixture of hydrocarbons), or clean fuels,” said Linda Wang, the Maxine Spencer Nichols Professor in the Davidson School of Chemical Engineering at Purdue University and leader of the research team developing this technology. “Our conversion technology has the potential to boost the profits of the recycling industry and shrink the world’s plastic waste stock.”

Wang, Kai Jin, a graduate student, and Wan-Ting (Grace) Chen, a postdoctoral researcher at Purdue, are the inventors of the technology, which can convert more than 90 percent of polyolefin waste into many different products, including pure polymers, naphtha, fuels, or monomers. The team is collaborating with Gozdem Kilaz, an assistant professor in the School of Engineering Technology, and her doctoral research assistant, Petr Vozka, in the Fuel Laboratory of Renewable Energy of the School of Engineering Technology, to optimize the conversion process to produce high-quality gasoline or diesel fuels.

The conversion process incorporates selective extraction and hydrothermal liquefaction. Once the plastic is converted into naphtha, it can be used as a feedstock for other chemicals or further separated into specialty solvents or other products. The clean fuels derived from the polyolefin waste generated each year can satisfy 4 percent of the annual demand for gasoline or diesel fuels. Some results of Wang’s study were published Jan. 29 in ACS Sustainable Chemistry and Engineering.

Wang became inspired to create this technology after reading about the plastic waste pollution of the oceans, ground water, and the environment. Of all the plastics produced over the past 65 years (8.3 billion tons), about 12 percent have been incinerated and only 9 percent have been recycled. The remaining 79 percent have gone into landfills or the oceans. The World Economic Forum predicts that by 2050 the oceans will hold more plastic waste than fish if the waste continues to be dumped into bodies of water.

A chemical conversion process developed at Purdue University allows researchers to turn recycled shopping bags into pellets into oil as shown in the bottle being held by Linda Wang, the Maxine Spencer Nichols Professor in the Davidson School of Chemical Engineering. Using distillation, that oil is separated into a gasoline-like fuel in the bottle in the counter and a diesel-like fuel not shown. (Purdue Research Foundation image/Vincent Walter)

Wang said the technology could convert up to 90 percent of the polyolefin plastic.

“Plastic waste disposal, whether recycled or thrown away, does not mean the end of the story,” Wang said. “These plastics degrade slowly and release toxic microplastics and chemicals into the land and the water. This is a catastrophe, because once these pollutants are in the oceans, they are impossible to retrieve completely.”

The work aligns with Purdue's Giant Leaps celebration, acknowledging the global advancements in sustainability as part of Purdue’s 150th anniversary. This is one of the four themes of the yearlong celebration’s Ideas Festival, designed to showcase Purdue as an intellectual center solving real-world issues.

Wang said she hopes her technology will stimulate the recycling industry to reduce the rapidly rising amount of plastic waste. She and her team are looking for investors or partners to assist with demonstrating this technology at a commercial scale.

Wang’s technology is patented through the Purdue Research Foundation’s Office of Technology Commercialization.

About Purdue Office of Technology Commercialization

The Purdue Office of Technology Commercialization operates one of the most comprehensive technology transfer programs among leading research universities in the United States. Services provided by this office support the economic development initiatives of Purdue University and benefit the university's academic activities. The office is managed by the Purdue Research Foundation, which received the 2016 Innovation and Economic Prosperity Universities Award for Innovation from the Association of Public and Land-grant Universities.