How garbage patches form in the world's oceans

A new study on how ocean currents transport floating marine debris is helping to explain how garbage patches form in the world's oceans. Researchers from the University of Miami Rosenstiel ​School of Marine & Atmospheric Science and colleagues ​​developed a ​mathematical ​model that ​simulates the ​motion of small ​spherical ​objects ​floating at the ​ocean surface. ​

Recent surveys of marine plastic debris density have revealed high levels in the center of the subtropical gyres. Earlier studies have argued that the formation of great garbage patches is due to Ekman convergence in such regions. In this work we report a tendency so far overlooked of drogued and undrogued drifters to accumulate distinctly over the subtropical gyres, with undrogued drifters accumulating in the same areas where plastic debris accumulate. We show that the observed accumulation is too fast for Ekman convergence to explain it. We demonstrate that the accumulation is controlled by finite-size and buoyancy (i.e., inertial) effects on undrogued drifter motion subjected to ocean current and wind drags. We infer that the motion of flotsam in general is constrained by similar effects. This is done by using a newly proposed Maxey-Riley equation which models the submerged (surfaced) drifter portion as a sphere of the fractional volume that is submerged (surfaced). 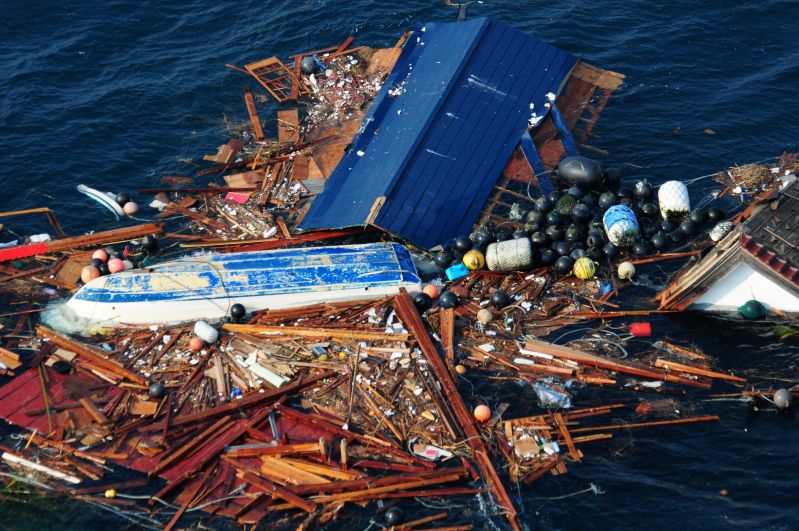 The researchers ​feed the model ​data on ​currents and ​winds to ​simulate the ​movement of ​marine debris. ​The model's ​results were ​then compared ​with data from ​satellite-​tracked surface ​buoys from the ​NOAA Global ​Drifter ​Program's ​database. Data ​from both ​anchored buoys ​and those that ​become ​unanchored, or ​undrogued, over ​time were used ​to see how each ​accumulated in ​the five ocean ​gyres over a ​roughly 20-year ​timeframe. ​

"We found ​that undrogued ​drifters ​accumulate in ​the centers of ​the gyres ​precisely where ​plastic debris ​accumulate to ​form the great ​garbage patches,​" said ​Francisco Beron-​Vera, a ​research ​associate ​professor in ​the UM ​Rosenstiel ​School's ​Department of ​Atmospheric ​Sciences and ​lead author of ​the study. "​While anchored ​drifters, which ​are designed to ​closely follow ​water motion, ​take a much ​longer time to ​accumulate in ​the center of ​the gyres." ​

The study, ​which takes ​into account ​the combined ​effects of ​water and wind-​induced drag on ​these objects, ​found that the ​accumulation of ​marine debris ​in the ​subtropical ​gyres is too ​fast to be due ​solely to the ​effect of trade ​winds that ​converge in ​these regions. ​

"We show that ​the size and ​weight of the ​drifters must ​be taken into ​account to ​fully explain ​the accumulation,​" said Maria ​Josefina ​Olascoaga, an ​associate ​professor in ​the UM ​Rosenstiel ​School's ​Department of ​Ocean Sciences ​and a co-author ​of the study. ​

The model could be used to track shipwrecks, airplane debris, sea ice and pollution among the many practical applications according to the researchers.