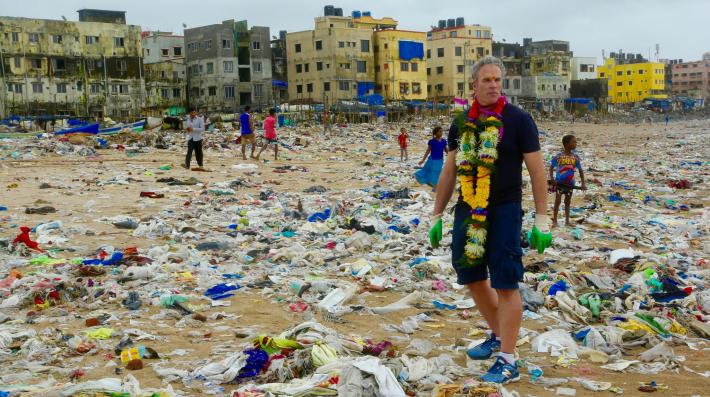 In a major win in the battle to turn the tide on plastic, British Prime Minister Theresa May has confirmed that the United Kingdom’s foreign aid budget will be used to fight plastic pollution in the developing world. The announcement follows direct campaigning on the issue from UN Environment Patron of the Oceans Lewis Pugh.

“We've all been very concerned by the pictures we've seen in recent months of the impact of pollution on marine life, the impact of plastic pollution,” May said on Tuesday at the One Planet Summit in Paris.

“Of course the UK Government has already taken steps in relation to plastic – a charge on carrier bags, a ban on microbeads. But we are looking at what more we can do.”

“That's not just the Environment Secretary but the International Development Secretary. To see how we can use overseas aid money to ensure we're doing what I think everybody wants, which is reducing this terrible pollution that is taking place and affecting marine life so devastatingly.”

British news channel Sky News reported on Wednesday that UK Environment Secretary Michael Gove had asked the Department for International Development (DfID) to consider increasing the proportion of the $17 million annual overseas aid budget that is devoted to stopping plastic pollution in the world’s oceans.

The announcement followed a meeting between Lewis Pugh and Secretary Gove, in which Pugh says that he pushed the British environment minister to use the country’s aid budget to address plastic pollution in the world’s oceans.

“I've been calling on the UK to take urgent action on plastic pollution, and today we have reason to celebrate!” Lewis Pugh posted on Twitter. “I’m thrilled that the British PM Theresa May has agreed to my recommendation and pledged to use foreign aid funds to tackle plastic pollution. It’s a global crisis and need to be tackled head on.”

“I’ve seen how plastic pollution devastates local economies, pollutes fresh water, kills the fish on which the poorest rely, destroys any tourism potential, and is causing a health hazard across the developing world,” he added.

The announcement from the British government supports the goals of the UN’s Clean Seas campaign, which aims to counter the torrents of plastic trash that are degrading our oceans and endangering the life they sustain. Launched at the Economist World Ocean Summit in Bali in February 2017, the campaign has already attracted the support of nearly 40 countries – from Kenya to Canada and Indonesia to Brazil. Together, these countries account for more than half of the world’s coastline.