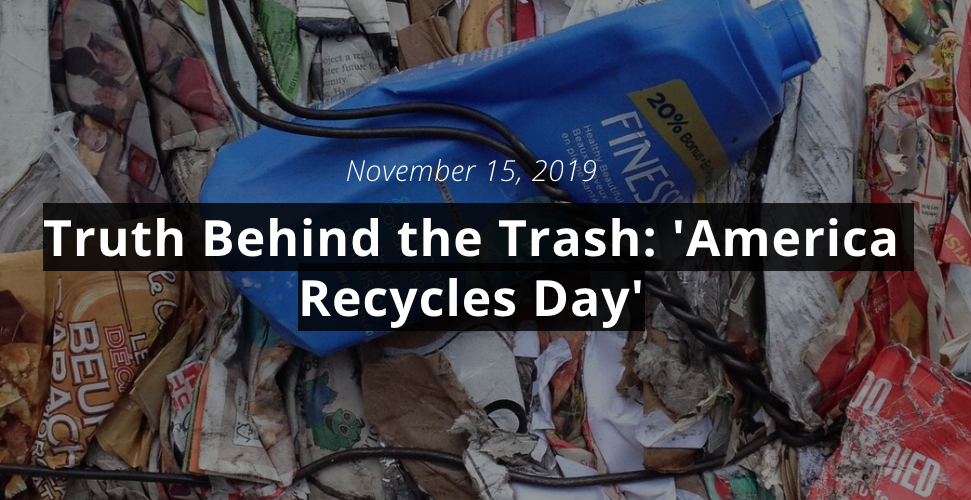 Through a series of ad campaigns spread out over decades —including the infamous “Crying Indian” commercial, which uses racist tropes about indigenous peoples to co-opt centuries of indigenous environmental stewardship and land struggles — the organization built a narrative around “litter” that diverts responsibility the growing plastic pollution problem away from corporations and onto individual consumers. America Recycles Day is an extension of this industry greenwashing. Keep America Beautiful’s corporate partners currently include some of the world’s top plastic polluters, including Coca-Cola, Pepsi, and Nestle. Several of these have lobbied against much-needed waste reduction solutions, such as bottle deposit legislation and bans on single-use disposables. In positioning recycling as the ultimate solution to our waste problem, corporate producers have meticulously evaded responsibility for the waste they create by claiming their products are “recyclable.”

So Keep America Beautiful is a little dodgy… but recycling is still a good thing, right?

Even with the best available recycling technology, the maximum recycling level for the current mix of plastics produced be somewhere between 36% and 53%. Municipalities are burdened with the massive, costly task of collecting, sorting, and processing recycled waste. This task has become more difficult now that more and more Asian countries are following China’s lead in rejecting imports of American recyclables. Our recycling systems aren’t equipped to deal with the staggering volume of plastic waste produced in this country. Much of this discarded plastic waste, including multi-layered plastics (such as potato chip bags), are extremely difficult and costly to recycle. Since they can’t, in a practical sense, be recycled, they end up in landfills, incinerators, and the environment. Domestic end markets for recycled materials are lacking, partly because the shale fracking boom makes virgin plastic extremely cheap: Coca-Cola, Pepsi, and Nestle only use 9%, 3%, and 2% recycled content in their products, respectively. We’ve only recycled 9% of all the plastics ever produced, while plastic production is expected to quadruple by 2050. Recycling is simply not enough.

So should we even bother with recycling?

Recycling is not enough, but that doesn’t mean we should forget about recycling altogether. We need to work with municipalities and mission-based recyclers to improve our recycling systems. Real recycling requires universal access to recycling and composting services, as well as the education, outreach, and incentives to help people separate their waste correctly. Policymakers should also require producers to use minimum recycled content, which would be one of many initiatives required to boost local economies by building domestic markets for recycled materials.

We also need to make sure risky burn technologies promoted by some of Keep America Beautiful’s sponsors such as “chemical recycling” (usually meaning plastic-to-fuel) aren’t sold to cities as sustainable waste management strategies. “If it doesn’t protect our health and the environment and prevent the need for more resource extraction, it’s not recycling”, according to the Alliance of Mission Based Recyclers.

If recycling isn’t enough, what is?

Recycling is just one piece of a much larger puzzle that must include upstream solutions to reduce the amount of waste produced in the first place. Communities and businesses across the world are working with local governments to get their municipalities on the road towards zero waste: they’re supporting initiatives around reuse and refill, organizing around product redesign, implementing bans on single-use disposables, improving collection services, and much more. Visit zerowasteworld.org to find stories and case studies about these powerful, placed-based zero waste solutions that are supporting both environmental and social goals. Corporations need to play their part, too. They’ve profited by externalizing the costs of their waste onto our communities and environment  for too long — it’s time to force them to take real, measurable actions towards reducing their waste and sustainably managing the end life of their products. Keep America Beautiful’s stated mission of inspiring and educating “people to take action every day to improve and beautify their community environment” is best exemplified by the global movement of sanitation workers, small businesses, sustainability departments, and community-based organizations working to Break Free From Plastic and build holistic solutions towards zero waste.