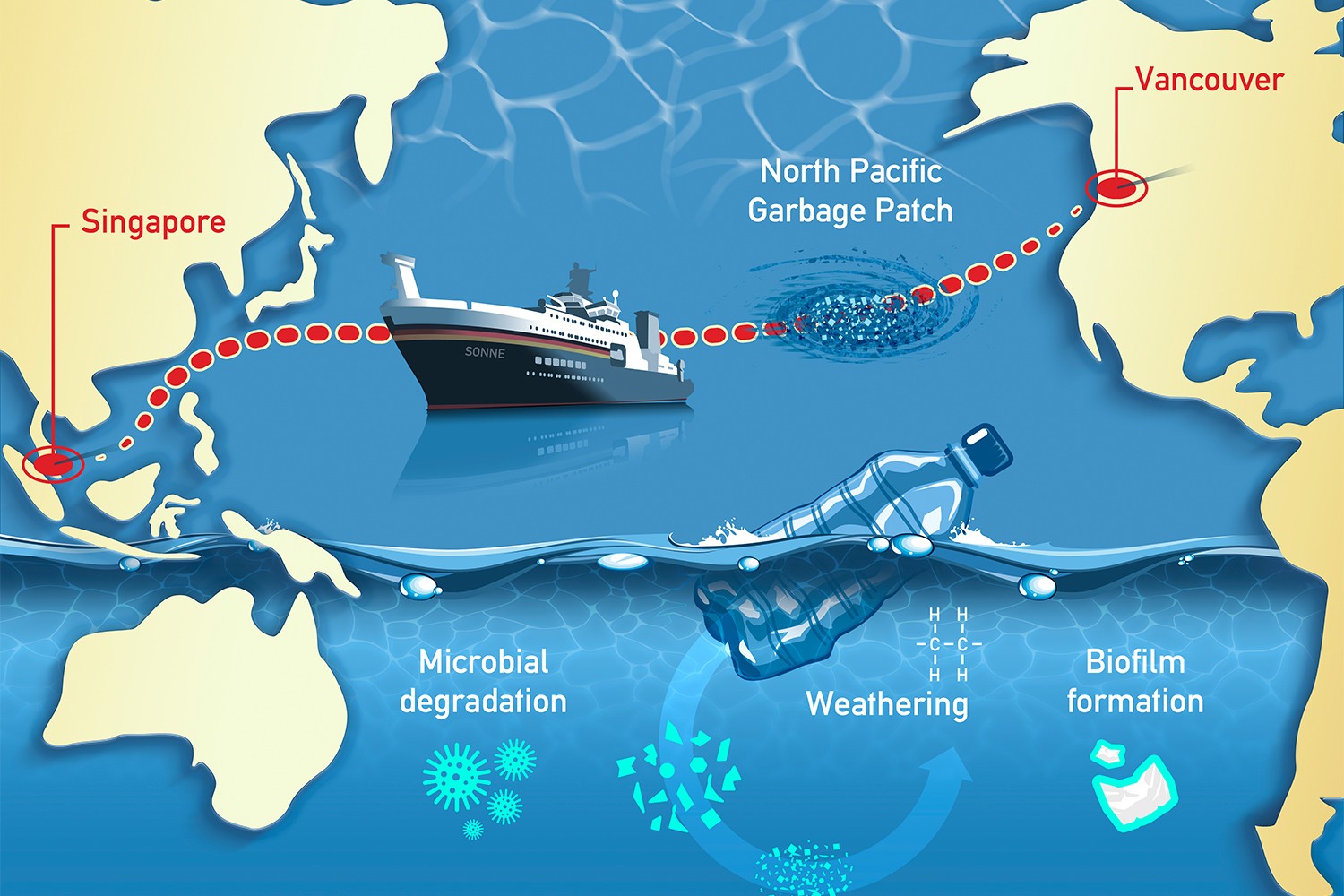 To date, little is known about what happens to microplastic in the sea. The MICRO-FATE project that is now starting under the leadership of the Helmholtz Centre for Environmental Research (UFZ) is expected to bring about a change to this situation .

The international team of researchers intends to find out where microplastic accumulate in the ocean, how it is degraded and the effects it has on the environment. A five-week expedition across the Pacific Ocean marks the start of the project. The trip on the research vessel "Sonne" will take the researchers from Vancouver to Singapore. Their most important objective is to take and conserve samples for upcoming laboratory analysis in addition to performing initial experiments.

Millions of tonnes of plastic waste are transported by rivers, by wind and in waste water into the sea, where the plastic remains. "To date, there are no detailed data on where plastic accumulates and how much," says UFZ environmental chemist, Dr Annika Jahnke. Previous estimates rely on computer modelling, individual data and observations from the air. "We want to provide substantiation for these estimates and to find out what happens to the plastic in the ocean and which effects microplastic has on the environment," Jahnke explains. At the UFZ, the environmental chemist heads the "MICRO-FATE" project funded by the Federal Ministry of Education and Research (BMBF), which will run until 2021and also includes researchers from the Fraunhofer Institute for Ceramic Technologies and Systems (IKTS), the Leibniz Institute for Baltic Sea Research, Warnemünde (IOW) and Stockholm University (SU) in Sweden. On 30 May, a team comprising 18 MICRO-FATE researchers are setting off from Vancouver (Canada) on an expedition across the Pacific Ocean. The team on board the research vessel "Sonne", scheduled to arrive in Singapore on 5 July, will consist mainly of biologists, ecotoxicologists and environmental chemists. They will take samples at several stations along the passage not only in the North Pacific Garbage Patch, one of the largest accumulation areas of floating waste in the Pacific Ocean, but also at less polluted locations.

One of the researchers’ primary objectives is to collect samples from the surface water, the water column and from the seabed. "To date, the water column has been insufficiently studied," explains Annika Jahnke. Hence, the researchers hope to find out more about the vertical distribution of the plastic particles and to identify potential gradients with regard to concentration, composition, age and coverage with biofilms.

An analysis of the samples from the seabed is also expected to provide information on plastic material in the sediments and on where microplastic end up in the sea. There are researchers who speculate that most of the material is deposited on the seabed. "The measurements will allow us to estimate whether it is true that only around one hundredth of the total amount of plastic can be found at the water surface," the environmental chemist says. The sediment samples and the water will also be examined for organic pollutants to find out if plastic is a source or sink of pollutants into the marine environment.

Another objective of the researchers is to examine how the polymer structure of the plastic particles changes as a consequence of weathering. "So far, we have only little knowledge on how marine plastic weathers," Jahnke says. "There are first results but no robust data." To date, weathering has been mostly simulated in the laboratory. For this reason, there are steel tanks filled with seawater on board the research vessel to expose plastic material. The researchers want to use these to examine the influence of solar radiation, the salt content and the temperature on the plastic weathering process. "The idea is to supplement the results of our previous laboratory experiments with these field experiments," the researcher explains.

The consequence of weathering is that plastic items gradually decay and ultimately fine polymer particles are formed. These tend to be covered with biofilms and to form heteroaggregates. The researchers hypothesise that these biofilms play a decisive role for the fate, transport and weathering of marine plastic. For this reason, they will analyse the biofilms and examine their function and the role they play in biogeochemical cycles in the marine environment. Studies suggest that biofilms growing on plastic differ from other marine microbiological communities and that plastic is consequently a new habitat for microbes in marine systems - with implications as yet unknown.

"Our aim is to reconcile field data with existing models," the UFZ researcher explains. "And the evaluation of the new data will put us into a better position to estimate how much plastic occurs in the oceans and which impacts microplastic have on the marine environment. We will learn more about the occurrence and fate of plastic and about whether the seabed is such a big sink for plastic as studies suggest."