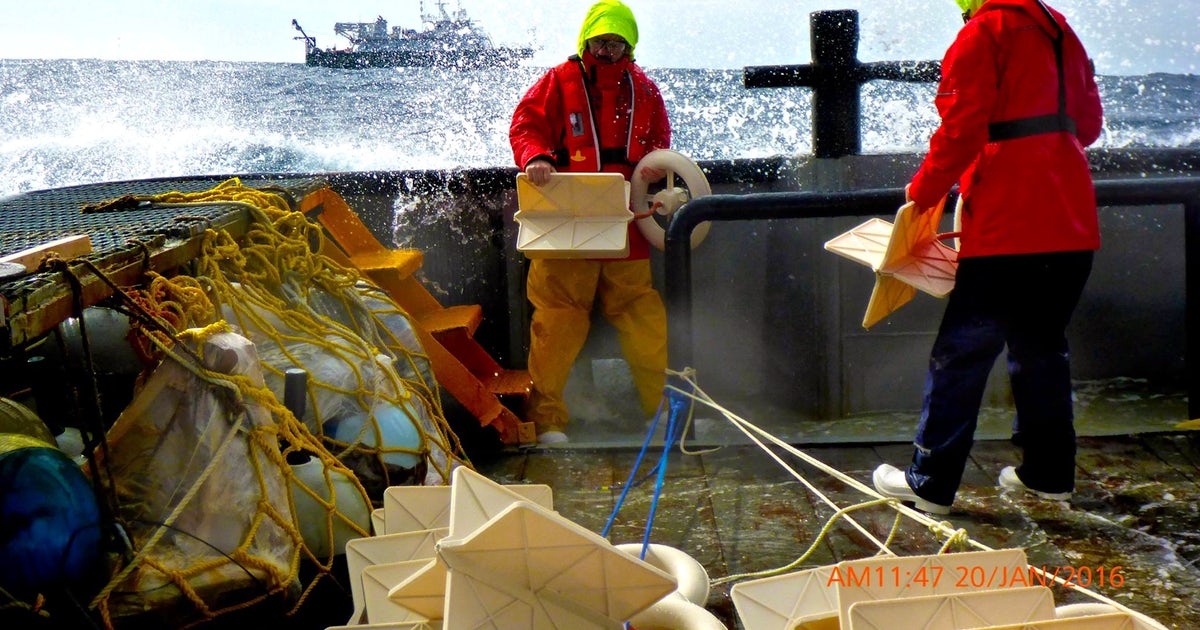 Researchers tracked hundreds of buoys deployed in the Gulf of Mexico. Not only did the buoys not spread out many concentrated into an area the size of a football stadium. The findings may help scientists pinpoint areas for plastic or oil-spill cleanup.

Researchers drop biodegradable instruments off the side of a ship in the Gulf of Mexico in early 2016.CARTHE/Guillaume Novelli

I was at the wheel of a 54ft (16m) research sloop crossing the north Pacific Ocean through the heart of one of the most plastic-polluted parts of the sea, when I spotted my first piece of floating plastic debris. It was a shredded corner of a sun-bleached orange fish crate. Minutes later, I saw a chunk of white foam drift by and then a pink dustpan. Next, there went a green cosmetics bottle, but soon after, it was clean deep blue sea again.

I’d been at sea for nearly two weeks in November 2016, sailing from California to Hawaii with a group of Danish sailors and scientists. Up until that day, the only plastic I’d seen was the tiny broken-up bits of “microplastic” the scientists had scooped out of the water with manta trawls and other sampling equipment. But as the trip progressed, some days I saw lots of larger floating junk, sometimes very little and sometimes none. It’s well known that circulating currents called gyres concentrate plastic over large areas of the ocean’s surface, but I wondered what was behind the day-to-day variations in trash.

New research published in January in the Proceedings of the National Academy of Sciences may help shed light on the phenomenon I witnessed at sea.

To date, scientists have largely thought that floating debris concentrates in certain areas of the ocean as the result of surface currents and winds. In the new study, however, scientists tracked the motion of drifting buoys deployed in the Gulf of Mexico and discovered another way that plastic congregates: downwelling, which occurs in areas where surface water sinks and is pulled down as in a bathtub drain, with water moving toward the vortex.

The study’s lead author, Eric D’Asaro, says the newly established relationship between downwelling and floating debris concentrations could be used to pinpoint accumulations of ocean pollutants for cleanup. The study was funded by the Gulf of Mexico Research Initiative, an independent research initiative established after the 2010 Deepwater Horizon oil spill, but its findings can be applied to anything floating on the ocean’s surface, whether spilled oil or plastic debris.

Of 326 buoys dropped into the Gulf of Mexico, the red dots show those that congregated into an area the size of a football field. (Andrey Shcherbina/University of Washington)

“It emphasizes that the distribution of buoyant material can be very non-uniform … and opens the possibility of predicting where such concentrations will occur,” said D’Asaro, a University of Washington oceanographer. “And if you know where oil is, it’s easier to recover.”

To emulate an oil spill, which spreads quickly to cover large swathes of ocean, researchers tossed GPS-equipped, donut-shaped drifter buoys made of a biodegradable plastic called polyhydroxyalkanoates (PHAs) and smaller bamboo drift cards, designed to float with currents. The buoys and cards were deployed from two research vessels over hundreds of miles in the Gulf over a stormy 30 days during the winter of 2016.

To track them, scientists used satellites and helium balloons and planes that took high-resolution and infrared imagery. Autonomous ocean gliders and other instruments collected real-time data on local atmospheric and ocean conditions, such as water density and wind speed.

Instead of staying spread out, as the scientists’ calculations predicted, within eight days half of the 326 drifters and drift cards used in the experiment moved together in clusters into a space smaller than a football stadium. In these areas, the buoys’ GPS data indicated strong downward movement, as if they were being pulled below the surface. Atmospheric and oceanic data collected in these zones confirmed the existence of downwelling vortices.

“I did not really expect such an amazing amount of convergence,” said D’Asaro.

This latest research builds off a similar but smaller 2012 effort that collected data about drifting items on the ocean’s surface. Together, the research suggests that in areas where water masses of different densities – varying in temperature or salinity – converge, vortices form and aggregate floating debris on the ocean’s surface. According to experts, this explains the behavior of the drifting items found at small-scale convergence zones in this study – and probably was what I saw at sea.

Kara Lavender Law, a professor of oceanography at the Sea Education Association (SEA) who was not involved in the study, called the research a “tremendously successful project.”

“In general, we have a very good understanding, on ocean basin scales, where to expect accumulations of floating debris, but it has not been so easy to explain very small-scale variations,” she said. “Anecdotally, we have observed – from the deck of the ship – long lines of accumulated debris, which could have been caused by the mechanism described.”

If there’s a way to predict where convergence zones form, concentrated oil spills and plastic pollution could be easier to track down and clean up. Law said this new knowledge of convergence zones could also be helpful in rescuing a lost ship or airplane or may even help improve models that seek to determine where a lost vessel, oil spill or concentration of plastic debris originated. That could help, eventually, get to the root of the plastic pollution problem.