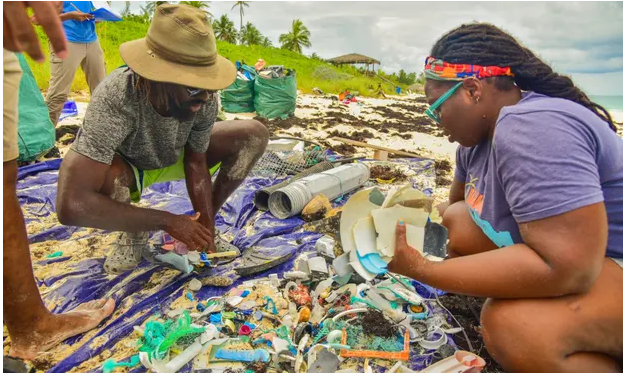 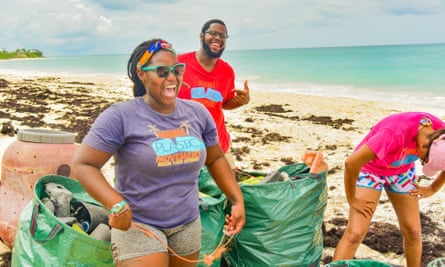 Kristal Ambrose (front) takes part in a beach cleanup. ‘We receive the world’s waste as well as producing our own,’ she says of the Bahamas. Photograph: Dorlan Curtis Jr. and Jawanza Small/2020 Goldman prize

Kristal Ambrose had to beat prejudices about class and race to change mindsets on the islands.

When the latest Goldman prize winner, Kristal Ambrose, began campaigning against plastic waste in the Bahamas, one of the first obstacles she had to overcome was prejudice about class and race.

“You have been around white people too long. We always use plastic bags,” she recalls being told by neighbours in Eleuthera, one of the 30 inhabited islands in the ocean state. “I had to challenge the mindset that only a certain class of people get to care about this stuff. I told them it is not just for tourists. It’s my island and I want to protect it.”

Still bigger challenges followed as Ambrose lobbied local politicians to ban single-use plastic and launched an education campaign to inform people about global overconsumption, particularly in rich nations, that contributed to the steady accumulation of rubbish on formerly pristine beaches, coral reefs and stretches of sea in the Caribbean.

“In the Bahamas, it’s a really big deal because we receive the world’s waste as well as producing our own,” she said. “This is paradise, until you look closely. Then you see the plastic pollution that washes in with the Sargasso Sea.”

Kristal Ambrose: ‘Most environmentalists in the Bahamas have been from the elite class.’ Photograph: 2020 Goldman prize

The 30-year-old marine biologist first became concerned about the issue a decade ago when she had to extricate plastic that had been swallowed by a sea turtle. The traumatic operation took two days and left her with a conviction that she would never drop waste on the ground again. At the age of 22, she was invited on an expedition to study the Pacific Ocean, where she sailed through the vast mass of marine and household debris known as the western garbage patch. This brought home how individual consumer habits had global environmental consequences. A short while later she began the campaign that was to become the Bahamas Plastic Movement.

The first task was raising awareness, first among her own community and then in the corridors of power in Nassau. For a young, working-class black woman from a distant island that was a challenge.

The Bahamas did not gain independence from Britain until 1973 and was long governed by a white minority. Inequality and elitism remain a huge problem, which has affected perceptions of responsibility for nature stewardship.

Ambrose refused to accept this. In recent years, campaigns for environmental justice increasingly go hand in hand with the struggle for economic and racial equality. While wealthy countries and older white individuals are often the main cause of waste, pollution and climate instability, the worst consequences tend to be concentrated among communities that are poor, young and black.

Ambrose started her campaign close to home and among the young, before branching out to address the structural and political causes of the plastic problem. For local children she organised a Junior Plastic Warriors environmental education programme with music, dance, and art activities. For teenagers she focused on recycling and staged a “trashion fashion show”. Pre-dating the global upsurge in youth activism initiated by Greta Thunberg, she led a group to Nassau in early 2018 who banged desks and chanted demands for the environment minister to ban single-use plastics. Several nations in the Caribbean had already implemented similar restrictions. Ambrose was invited to help draft the law for the Bahamas, which came into place this year.

Her achievement was recognised on Monday when she was awarded the prestigious Goldman environmental prize, which is given each year to activists in each of the world’s six inhabited continents. 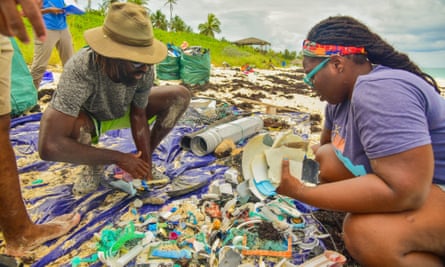 For the third year in a row, the majority of the winners are women – a strengthening trend in the prize’s 30-year history.

Ambrose’s selection highlights the growing power of youth activism and increased fears about ocean plastic, while other choices reflected the increased prominence of campaigns against coal and oil and or in favour of indigenous rights.

Anti-fossi fuel activists won three of the six awards. In Africa, the winner was Chibeze Ezekiel, whose four-year grassroots campaign in Ghana succeeded in blocking the country’s first coal power plant and prompted the government to commit to a renewable energy future. In Europe, the prize went to Lucie Pinson, who pressured three French banks and two insurance companies to end support for coal mines and related companies. In South America – long the most dangerous continent in the world for environmental and land activists – Nemonte Nenquimo from Ecuador was recognised for moves to protect Waorani territory in the Amazonian rainforest from oil extraction.

The importance of indigenous rights was also recognised in the choices for Asia and North America: Paul Sein Twa, who led the successful struggle of the Karen people to establish a 1.35m-acre peace park and biodiversity zone in the Salween river basin of Myanmar, and Leydy Pech, an indigenous Mayan beekeeper, who led a successful legal challenge against Monsanto’s plans to plant genetically modified soya beans in southern Mexico.

Ambrose said the award would help her campaign gain more exposure. She is now studying marine waste in Sweden and aims to use the results of her research to build stronger organisations and awareness in the Bahamas.

“We need to bridge the gap between community and science. It is no good publishing research every year if the information is not going to the people,” she said. “Plastic is just a tool.

“It’s about way more than that. It’s about helping young people to find their voice and recognise we are in this together.”