PE, PP and PS among The Most Abundant Type of Microplastics in Mediterranean Coastal Waters 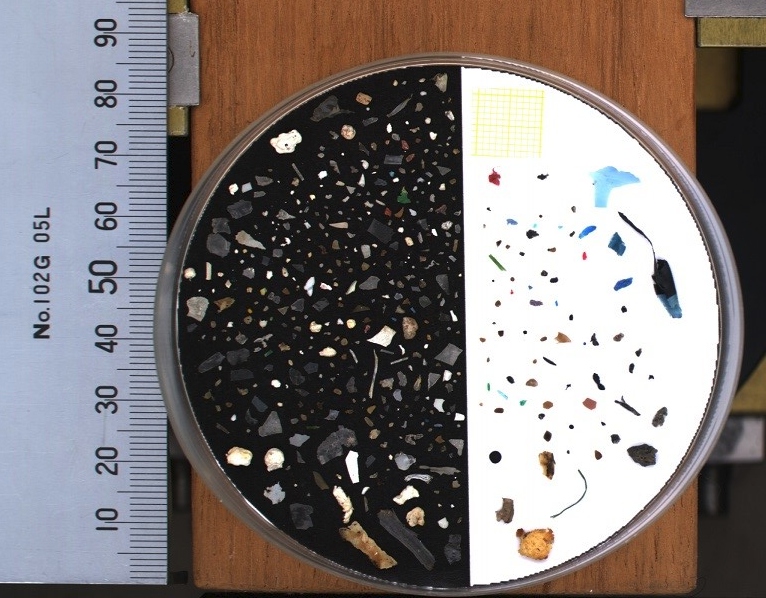 Polyethylene, polypropylene and polystyrene are the most abundant microplastics in the Mediterranean coastal waters, according to a new study published by the journal Marine Pollution Bulletin.

Research was conducted by the experts Miquel Canals, William P. de Haan, and Anna Sànchez-Vidal, from the Consolidated Research Group on Marine Geosciences of the Faculty of Earth Sciences of the University of Barcelona. 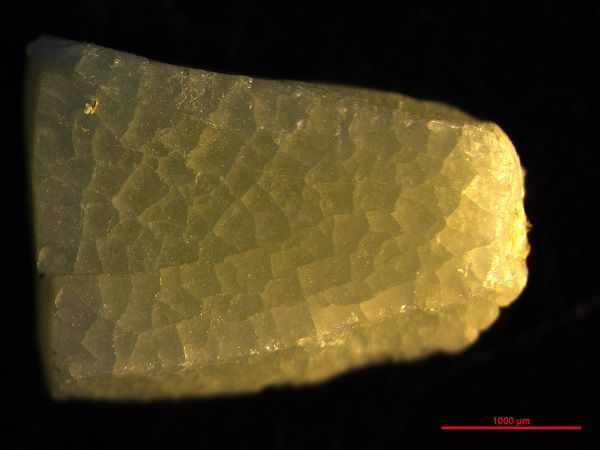 This study describes the presence of different types of microplastics in the peninsular coastal Mediterranean, in particular at the coasts of Catalonia, the region of Murcia and Almeria. According to the results, other abundant types are nylon polymers, polyurethane (PUR), polyethylene terephthalate (PET), ethylene-vinyl acetate (EVA), polyvinyl chloride (PVC), acrylonitrile butadiene styrene (ABS) and fluorocarbon polymer. The experts also identified for the first time, signs of plastic materials with marine origins –in particular, particles of ship painting- which were not studied in the Mediterranean basin until now.

Cylinders and small spheres, polyester foam, filaments from fishing gears and many pieces of plastic from varied chemical compositions are among the found materials in Mediterranean coasts. The study has analysed about 2,500 samples of plastic materials taken from different oceanographic campaigns over a north-south axis in every area of study. In all studied areas, the most abundant materials are fragments of polyethylene (54.5 %), polypropylene (16.5 %) and polyester (9.7 %) –the most produced thermoplastic polymer worldwide- which float in marine waters and are likely to come from the continent.

So far, none of the scientific studies could prove the permanence time of plastics in the sea before these deteriorate or are buried. According to the new study, the microplastics researchers found in the Mediterranean coasts “are round-shaped, and small –about a milimeter- and light-weighted, which could suggest a state of advanced deterioration and therefore, a long permanence in the marine environment”, says expert William P. de Haan, member of the research group on Marine Geosciences and first author of the study.

The study identified places in the peninsular coasts which have maximum concentrations up to 500,000 microplastics per square kilometre, over the average, which is 100,000 mp/km2. “These results coincide with studies conducted in other regions of the Mediterranean, a marine ecosystem regarded as one of the biggest scuppers of floating microplastic worldwide”, notes William P. de Haan. 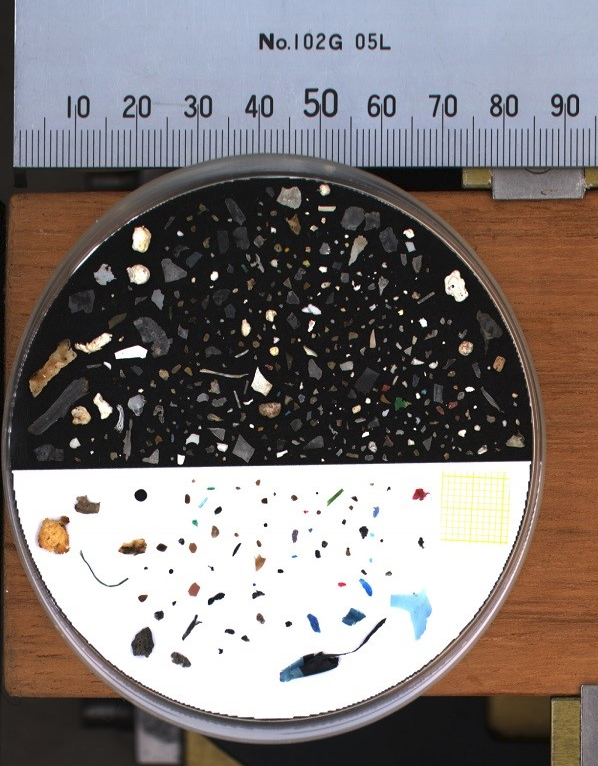 Researchers detected concentrations up to 500,000 microplastics per square kilometer in the Catalan coasts  (Image by UB)

Microplastics in Catalan coasts: extreme values in Tordera and Besòs

In the Catalan coasts, the average concentration of microplastics is over 180,000 items per square kilometre. The most extreme levels have been found in the coasts of Tordera (500.000 mp/km2) and in Besòs (fins a 110.000 mp/km2), which are areas with a notable anthropic pressure due the high density of population, tourism, use of beaches, and marine activities. The most abundant microplastics among those analysed were polyethylene and most were translucent or transparent (65 %).

In these coastal areas, the changes in intensity and the North Current –which moves simultaneously from north to south in the coast- and currents from the littoral, are factors that may affect the distribution of microplastics in the sea. According to previous studies, the North Current could bring up to a thousand million plastic particles per day –weighting up to 86 tons.

Murcia and Almeria: currents that come from the Atlantic and greenhouses

In the coastal waters of Murcia and Almeria, the variety of polymers is even higher –mainly nylon, polyurethane or polyethylene terephthalate- than the one in Catalan waters and the most predominant ones are dense microplastics which drown easily. Regarding colors, the most abundant ones are matt white (46 % in Murcia and 54 % in Almeria) and dark colors (20 % and 12 % respectively). In these coasts, marine dynamics –with the arrival of surface waters from the Strait of Gibraltar- could favour the emergence of microplastics coming from the Atlantic Ocean.

Moreover, there are extensions of cultivations in greenhouses –such as in Campo de Dalias, in Almeria- that generate uncontrolled dumpings of plastic in areas near the Almeria coast, with a maximum value of 130,000 mp/km2. In Murcia, the highest concentration is in Cartagena -140.000 mp/km2- but there are other places –such as the Mar Menor lagoon- that are affected by the impact of human activity.

The diversity of microplastics in the sea regarding composition and color, as well as differences in concentration, show different origins and volume depending on the analysed area of the coast, according to the authors. 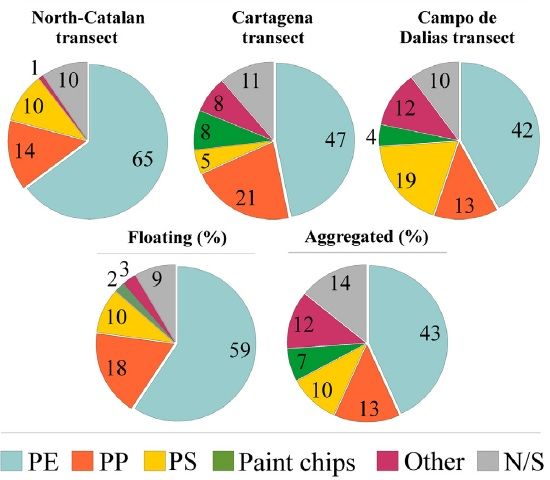 The diversity of microplastics in the sea, as well as differences in concentration, show different origins and volume depending on the analyzed area of the coast  (Image by UB)

What is the final destination of marine plastics?

“Density of the plastic material is a determining factor regarding big fragments. When talking of a microplastic, dynamics are more complex. Also, the density of marine water varies due to several factors –temperature, salinity, geographical position, depth- and it affects directly the buoyancy of the microplastics”.

The study describes for the first time the aggregate potential of microplastics to integrate into marine organics, formed by organic and mineral-derived particles. This interaction –described so far in the laboratory only- is a phenomenon that occurs naturally in the marine environment, as stated in the new study.

Therefore, 40 % of the microplastics –in quantity- and 25 % -in mass- can create these marine aggregates. This process could ease the drowning and accumulation of light microplastics in marine floors, an environment far from the only agent able to deteriorate them: the solar ultraviolet radiation.

Usually, plastics that float in the marine surface are eaten by marine organisms, which may think they are food. Even zooplankton is able to eat microplastics and throw them through faecal pellets. This is a known situation –and not enough studied- in marine ecosystems.

Also, apart from additives they contain per se, microplastics can bring toxic compounds to the trophic chain in marine waters (metals, organic pollutants, and others). Transported by marine currents, these plastic materials can become dispersal vehicles for invasive species and pathogenic organisms. 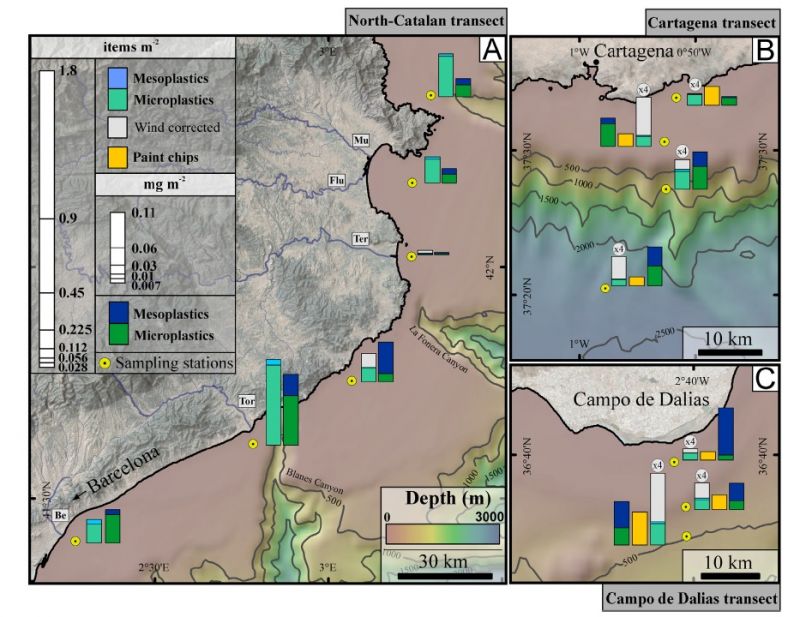 The experts analyzed around 2,500 samples of plastic materials taken in oceanographic campaigns in Catalan coasts, in Murcia and in Almeria (Image by UB)

Protecting the marine and coastal system in the Mediterranean

In this situation of scientific challenges, experts from the research group on Marine Geosciences of the UB have participated in different international studies that warn about the environmental impact of microparticles in the marine environment. At the same time, they take part in scientific projects to improve the preservation of marine ecosystems in the Mediterranean basin, such as the projects Policy-oriented marine Environmental Research in the Southern European Seas (PERSEUS) and Implementation of the MSFD to the DEep Mediterranean Sea (IDEM).

Regarding the Mediterranean, some of the most important resources on environmental protection are the Marine Strategy Framework Directive (MSFD) and the Barcelona Agreement for the Protection of the Mediterranean Sea, signed in 1976 and modified in 1995. According to Professor Miquel Canals, head of the research group on Marine Geosciences of the UB and director of the Department of Earth and Ocean Dyanmics of the UB “The Framework Directive considers a series of initiatives to protect and improve the environmental state of marine ecosystems in Europe. In these lines, it defines a series of indicators that study aspects related to research on marine waste, and in particular, a better knowledge on environmental and biological impacts of microparticles in the marine environment”.

“Also, prevention of any kind of pollution is one of the main objectives of the Barcelona Agreement. In this context, there are initiatives such as Fent front a les deixalles marines a la Mediterrània and Una Mediterrània sense plastics, related to the environmental impact of microplastics”, concludes Professor Miquel Canals.