Ocean Life Eats Tons of Plastic—Here’s Why That Matters 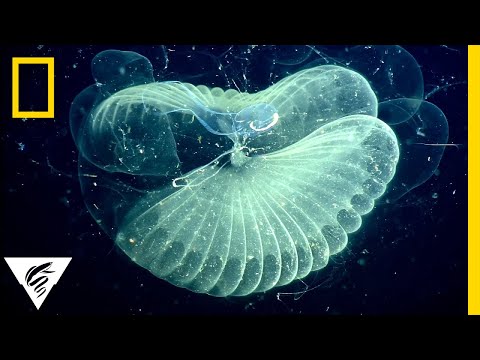 Fish and invertebrates have been found to gobble up bits of microplastic from the sea, and that has scientists worried.

Anchovies are known more as a pickled pizza topping than for their crucial place in the marine food chain. Now scientists have confirmed a disturbing new behavior by these tiny forage fish that could have larger implications for human health: anchovies are eating tiny pieces of ocean plastic, and because they, in turn, are eaten by larger fish, the toxins in those microplastics could be transferred to fish consumed by humans. 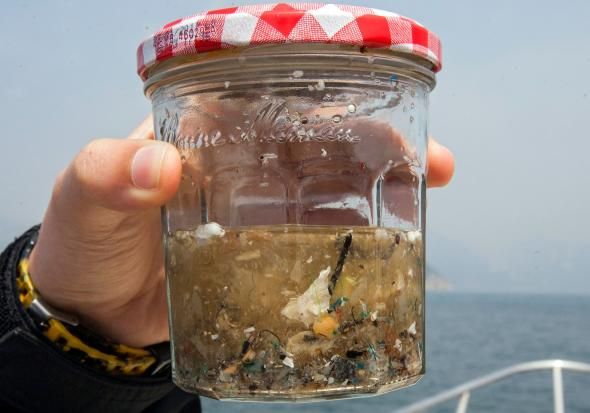 A student from the University of Hong Kong holds a jar containing a sample of " microplastics," pieces less than five millimeters long, collected in a fine-mesh net from the sea surface by Plastic Free Seas, a Hong Kong environmental non-profit focused on reducing the amount of plastics used by the public as well as cleaning up the marine environment.
PHOTOGRAPH BY ALEX HOFFORD, EPA, REDUX

Anchovies are mistaking microplastics for food because it smells like food, according to a new study in the science journal   Proceedings of the Royal Society B  . The findings are among two new studies examining the impact of microplastics on the marine environment published this week. The other study, which appears in the journal  Science Advances  , explains, in part, how microplastics are transported to the deep ocean by tiny marine invertebrates known as  giant larvaceans.

Microplastics are created when larger plastic debris breaks down by sunlight and wave action into rice-sized bits that measure five millimeters or less.  They have turned the world’ s  oceans  into what scientists call a “ plastic soup, ” but their impact on the marine ecosystem is not fully understood. A 2015  study  that attempted to measure how much microplastic is in the world’s oceans confirmed the “ soup” description, when it estimated the number of particles in 2014 ranged from 15 to 51 trillion pieces, weighing between 93,000 and 236,000 metric tons. 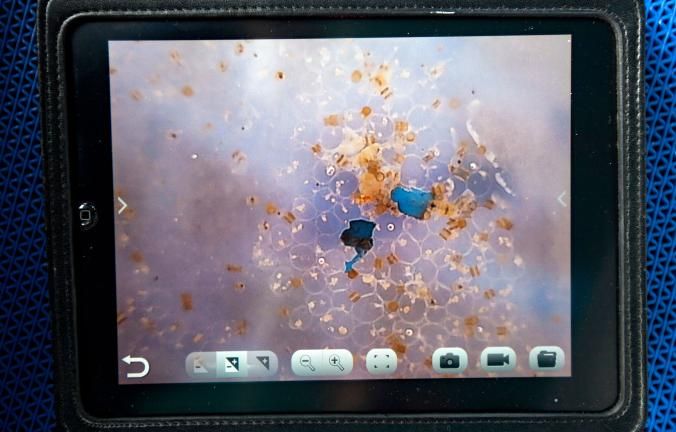 Two fragments of blue  microplastic, likely to have originated from discarded fishing gear, are seen surrounded by diatom phytoplankton on an iPad screen connected to a microscope, having been collected in a fine mesh trawl net during a sea surface trawl through by Hong Kong University students of environmental sciences and staff from Plastic Free Seas, in the Lamma Channel, in Hong Kong, China, 27 February 2016. Plastic Free Seas is a Hong Kong environmental charity which is focussed on reducing  the amount of  plastics used by the public in daily life as well as cleaning up the marine environment of existing plastic trash.
PHOTOGRAPH BY ALEX HOFFORD, EPA, REDUX

But other questions remain. Among them: How long does it take for plastic to degrade in the ocean and what happens to its toxins as that breakdown occurs? Some 700 species eat plastic, but the impact of that is still under investigation.

The body of  research  is growing rapidly. When  Matthew Savoca, a post-doctoral researcher at the  National Oceanic and Atmospheric Administration Southwest Fisheries Science Center in Monterey, California, began his anchovy study, 50 species of fish had been documented eating microplastics. When his research concluded two years later, the count had doubled to 100 species of fish.

“The scientific interest in this problem has absolutely exploded in the last five years, ” Savoca says. “In the public eye, there is this idea that all the plastic out there is large pieces that we can identify. Toothbrushes, cigarette lighters, plastic bags. But the vast majority of ocean plastics are these small fragments. More than 90 percent are less than 10 millimeters long. It’ s really small stuff.” 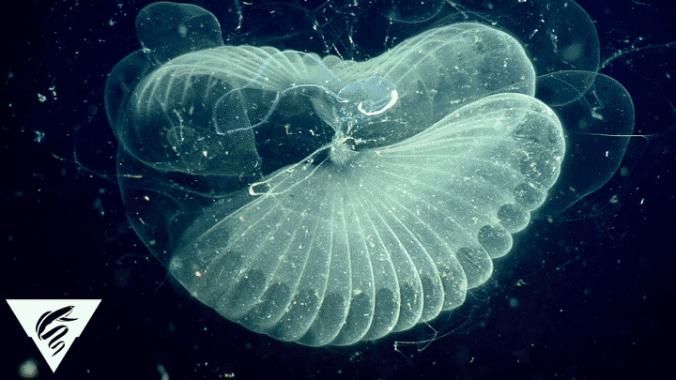 The inner filter of a giant larvacean, a member of the genus Bathochordaeus.
PHOTOGRAPH COURTESY MBARI

As larger pieces of plastic debris in the ocean are broken down, they also collect algae and take on an odor that is similar to food that marine animals consume. Savoca’s anchovy research is similar to a  study  he published 2016 showing that seabirds also mistake plastic for food because of its odor.

In the bird study, Savoca reviewed historical data, but he did not test actual living birds. For his anchovy study, he tested the fish themselves. But his focus was fish behavior.

The anchovies were not fed microplastic; instead, Savoca supplied wild- caught schools of northern anchovy, found in Monterey Bay, California, with the two kinds of odor solutions, one made of plastic debris and the other made of clean plastic. The anchovies responded to the debris plastic with foraging behavior typical of their feeding practices. They did not respond to the clean plastic.

Anchovies are one of some 700 species of animals and fish that have eaten ocean plastic, the study concludes. Savoca chose anchovies to study because of their role in the food chain.

“They are an important link in coastal marine systems, ” he says. “They eat krill ( small shrimp). But they are also food for humpback whales and sea lions and seals and seabirds and even people. ”

HOW PLASTIC GETS AROUND

The second study out this week sought to answer another of the mysteries of microplastics: how they manage to transport themselves throughout the marine ecosystem, into even the most remote ocean reaches, such as the deep ocean floor and Arctic sea ice.

Kakani Katija,  a National Geographic Explorer and marine scientist at the Monterey Bay Aquarium Research Institute, found that microplastics are carried to the deep ocean after they have been consumed by many tiny marine invertebrates, or filter feeding organisms known as larvaceans. This study, also conducted in Monterey Bay, California, used remote operated vehicles to track how the larvaceans filtered microplastics from the water column and ingested them.

The plastic was then “ packed” into their fecal pellets or into the “ houses” made of excreted mucus, in which the larvaceans live—and which sink rapidly into the deep ocean, carrying the plastic with them. The scientists were not able to calculate how much microplastic is moved through the ocean this way, Katija says. However, the presence of microplastics at greater depths is further indication of the magnitude of the problem. Aside from providing transport, larvaceans are also consumed by a wide range of larger marine animals, thus spreading microplastics more thoroughly through the marine food web.

“ Plastics have long been thought to be largely a surface problem, ” Katija says. “ However, recent work has shown deposits of plastics in bottom ocean sediments wherever scientists have looked. How do plastics get there? How rapidly do these plastics travel to the ocean bottom?

“Since other organisms eat larvaceans, their fecal pellets and their mucus houses, there are many different avenues by which microplastics and their chemical signatures can enter marine food webs and potentially wind up on our plates.”