Microplastics Impacting Lake Tahoe, One of the Cleanest Water Bodies in the World (Video) 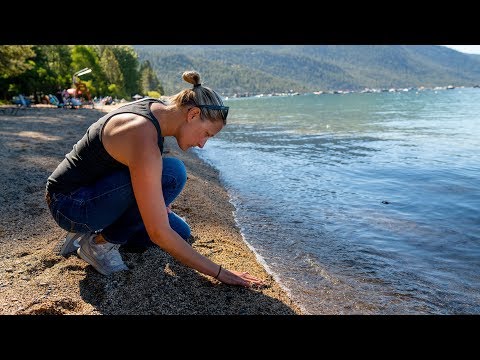 UC Davis Tahoe Environmental Research Center is finding microplastics in one of the world’s clearest lakes: The University Staff Researcher is studying how microplastics are impacting the beaches along the shoreline of Lake Tahoe.

If Katie Senft’s preliminary research at one of the clearest, cleanest lakes in the world is any indication, the problem is widespread in freshwater systems, as well.

Eventually, Senft would like to sample at least four beaches every quarter, looking not only at trash but also atmospheric deposition and stormwater runoff sources of plastic.

In the meantime, she hopes the baseline data she’s collecting from this and last year will help bring attention to the issue, lay the groundwork for measures Lake Tahoe can take and establish methods scientists can apply when researching microplastics in other lake systems.

Unlike many freshwater systems, the wastewater produced in the Tahoe Basin is piped out and does not return to the lake. Wastewater is the main source of microplastics in most freshwater systems, with microfibers — small bits of fiber from laundered clothes that find their way back to water systems — being the primary plastic pollutant.

“That means the microplastics we’re finding at Lake Tahoe are most likely from improperly disposed trash,” Senft said.

Residents and visitors can help by reducing the amount of plastic brought to the beach from the beginning. Lake Tahoe has some of the nation’s cleanest drinking water, so forgoing the packs of small plastic water bottles for a reusable one is an easy place to start. There’s even a TapApp that can point people to local water refill stations. For other plastic items, make sure to throw away or pack out whatever is brought in.

“The problem of plastics in Tahoe is, I believe, very solvable,” Senft said. “People think everyone can’t make a difference, but we’re actually really powerful. If everyone picked up their trash, it would make a huge difference.”