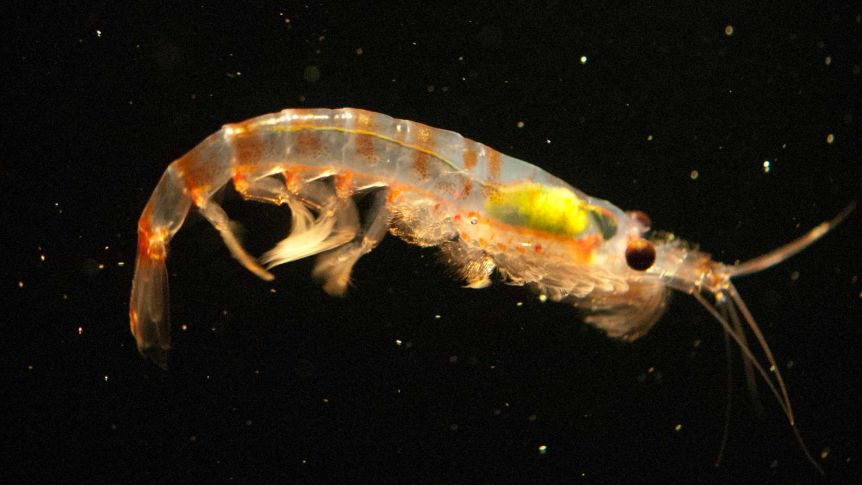 Krill in the Southern Ocean are able to break down plastic pollution, with a Griffith University study finding they are unknowingly ingesting micro-plastics and breaking them down into nano-plastics.

Krill may be at the bottom of the food chain, but they are proving to be a secret weapon in the war against ocean plastics, one poo at a time.

The tiny crustaceans are ingesting micro-plastics unknowingly, and breaking them down into much smaller nano-plastics through their digestive system, research has found.

The study, published in Nature Communications, has formed part of the PhD research of Dr Amanda Dawson from Griffith University.

Dr Dawson said she was "extremely surprised" by the results.

"It took me a long time to believe my results actually, I went back and re-tested over again," she said.

"It was pretty mind-blowing when we found out krill could break up plastics into tiny pieces.

"The most significant thing for me is that we fed the krill plastics that are brand new, but the reality is micro-plastics in the environment are already degraded, so if krill can grind up brand new plastics what can they be doing with old plastics?"

However, Dr Dawson said it may be too early to thank the krill for their environmental work, as more studies were needed.

The experiment was conducted at the Australian Antarctic Division's (AAD) krill aquarium in Hobart.

Krill biologist Rob King said krill were able to eat creatures their own size, so it was understandable that they were ingesting micro-plastics — which are bits of plastics under 5 millimetres.

There's up to 500 million tonnes of krill in the Southern Ocean, with each creature filtering 86 litres of sea water a day.

"There's just so much krill in the Southern Ocean, every day billions of tonnes of Antarctic sea water is filtered effectively by the krill population," he said.

"That's an enormous filter breaking these plastics down."

Mr King said all plastics break down in the ocean eventually, but the krill were accelerating the process.

"We need to know which other crustaceans can do it, it's likely to be widespread as they have similar breakdown mechanism in their digestive tracts," he said.

The research has also raised further questions about the impact of the discovery.

"By breaking it down, krill are making it available to organisms smaller than krill that wouldn't have otherwise eaten it," he said.

There's also the potential for toxins to be passed up through the food chain.

Mr King said more studies could be conducted when the AAD got its new icebreaker.

"This is something we'd love to try with some other species, firstly we need to get the ship and get all the systems running."