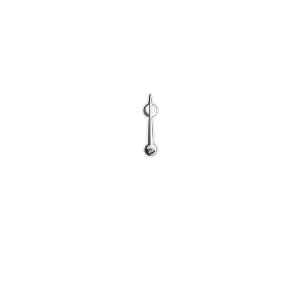 A two-month stopover in Indonesia has come to an end for the Race for Water teams, who are leaving with strong images in their minds, overwhelmed by deep emotions in the face of the harsh reality affecting children, women and men who spend their lives on heaps of waste.

But on the other hand, many meetings were held, giving hope for a better future in Indonesia, with structures like the Green School in Bali, or the various initiatives to improve waste management, coming from both the authorities and civil society which is often the driving force behind such initiatives…

Indonesia is, according to Jenna Jambeck’s 2010 global survey, the second-largest contributor to marine plastic pollution. 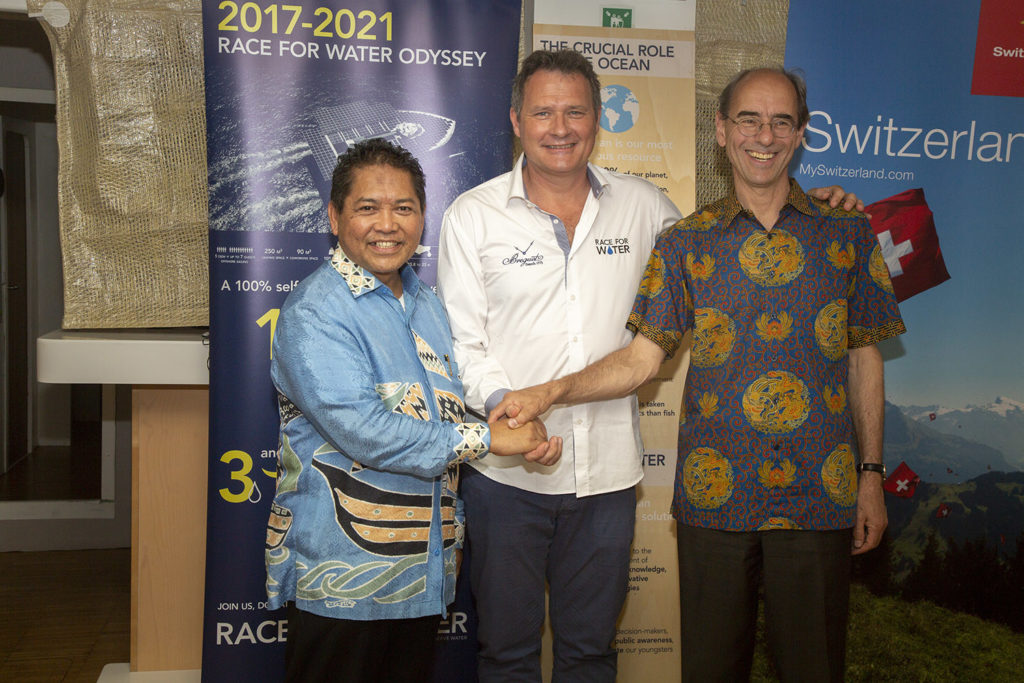 During the Press Conference  organised on board Race for Water, Deputy Minister Safri Burhanuddin, Maritime Affairs Coordinator, outlined the current context and the national action plan launched in 2018 by the Government to tackle marine debris.

Today, only 60% of Indonesian waste is collected by municipal management systems, the rest is burned in the open air or dumped into the environment, often directly into rivers. The country consumes more than 6 million tons of plastic annually. As a result, nearly 1 million tons of Indonesian plastics end up in the oceans every year.

In 2017, the Indonesian government announced a bold commitment to reduce waste generation by 30% and ocean plastics by 70% by 2025. The action plan is divided into 5 relevant and complementary strategies:

Bali took the bull by the horns following pressure from Melati and Isabel, two sisters who at the age of 10 and 13 launched the “bye plastic bag” movement in 2013. Since this summer, plastic bags, straws and polystyrene are officially banned on the island. Other areas such as Bogor and West Java have banned plastic bags in shops. 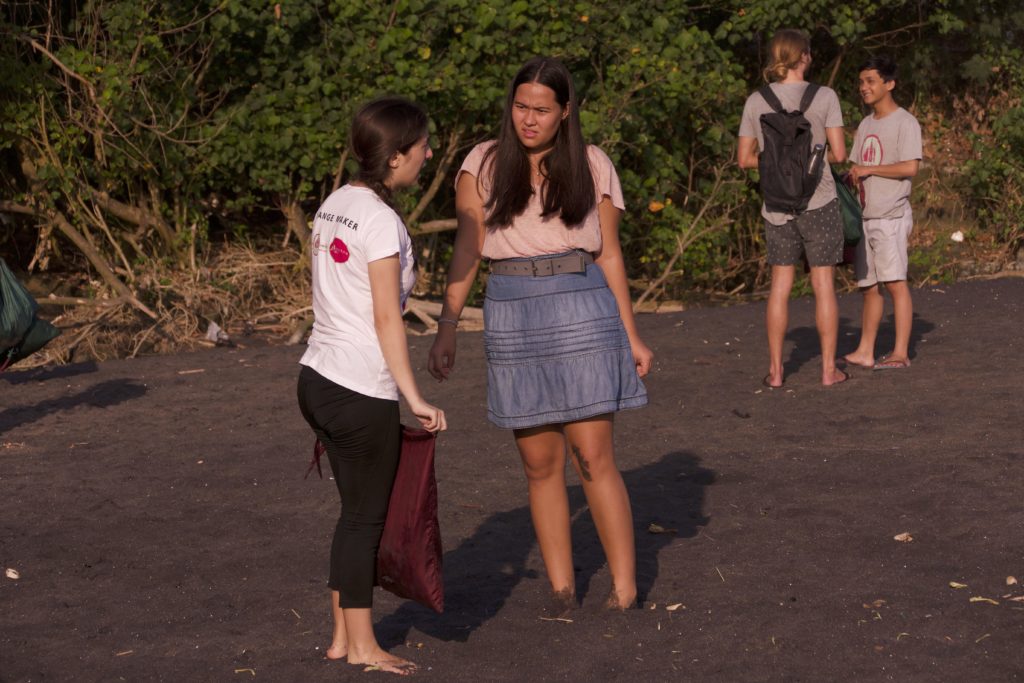 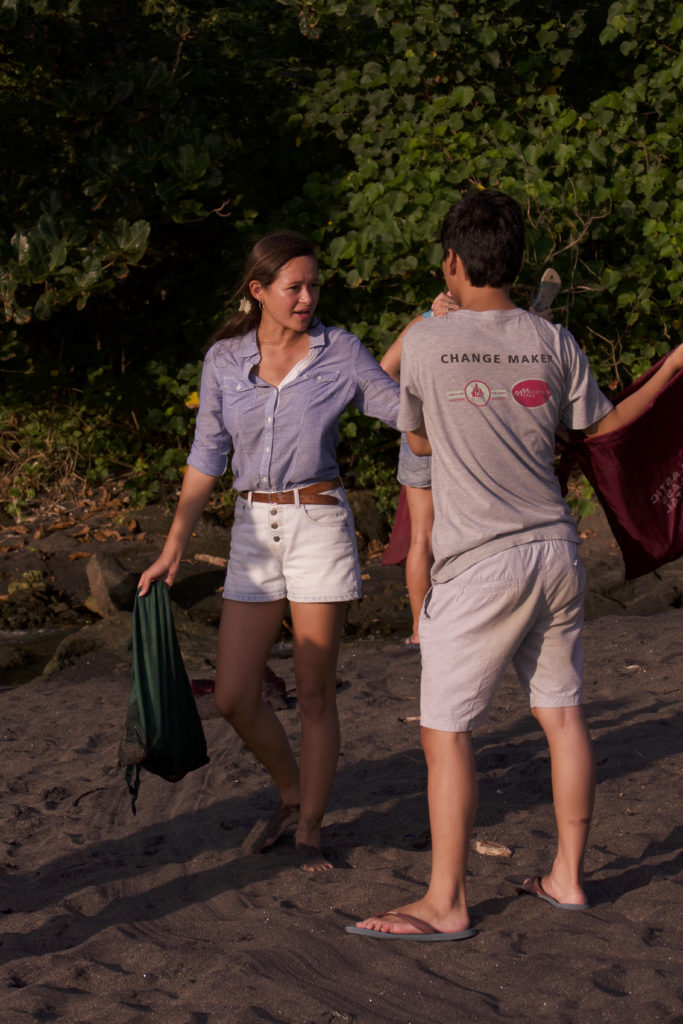 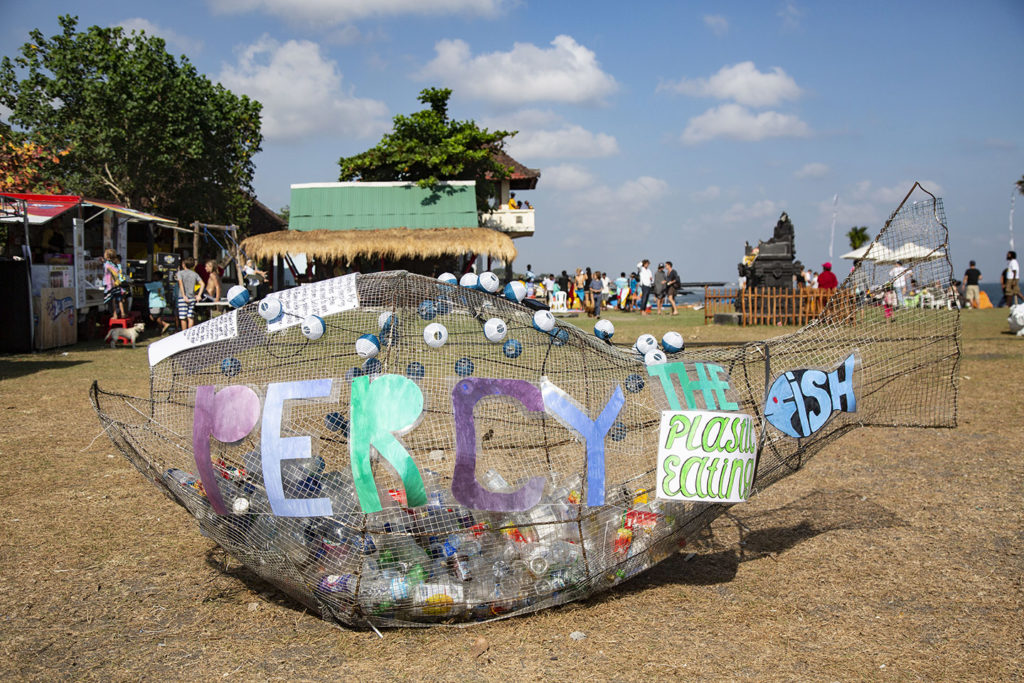 At the national level, a tax on plastic is currently being studied to encourage businesses to find more sustainable alternatives. In the meantime, several major cleaning operations of the main rivers have been carried out over the past two years involving the army and several universities. The president has given himself 7 years to clean up the Citarum River, sadly known as the most polluted on the planet. Some areas are now cleaned regularly, and investments are beginning to be made in waste collection and management systems. 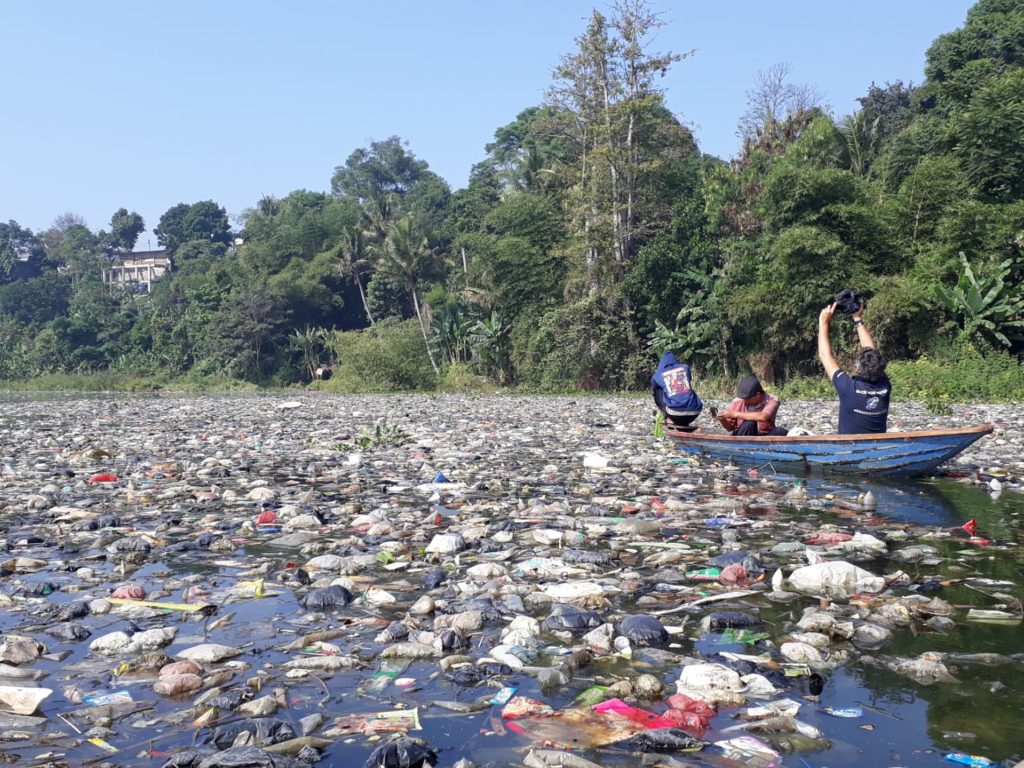 Because that’s where the problem lies. On the ground, we have seen the huge disparity in infrastructure across cities and regions. Large cities such as Jakarta usually have rubbish collection at home. On the other hand, as soon as we moved away from the city centre, we saw that these services disappear, leaving the people to fend for themselves. This is the case of many villages located on the banks of the Citarum. Rubbish dumping points are still visible along the 270 km stretch of the river.

Another witness to the consequences of the lack of a waste management system in a country in full economic and demographic growth, is the fishing village of Lekok east of the island of Java. Here the population has tripled in 10 years without any infrastructure being put in place, either for water treatment or waste management. Many households do not even have toilets. While most of the population here earns a living from fishing, the river that runs through the city and the large beach in front of which their boats anchor, have gradually been covered with the waste of the inhabitants. The stench is intolerable, insects swarm, and the water is full of methane. 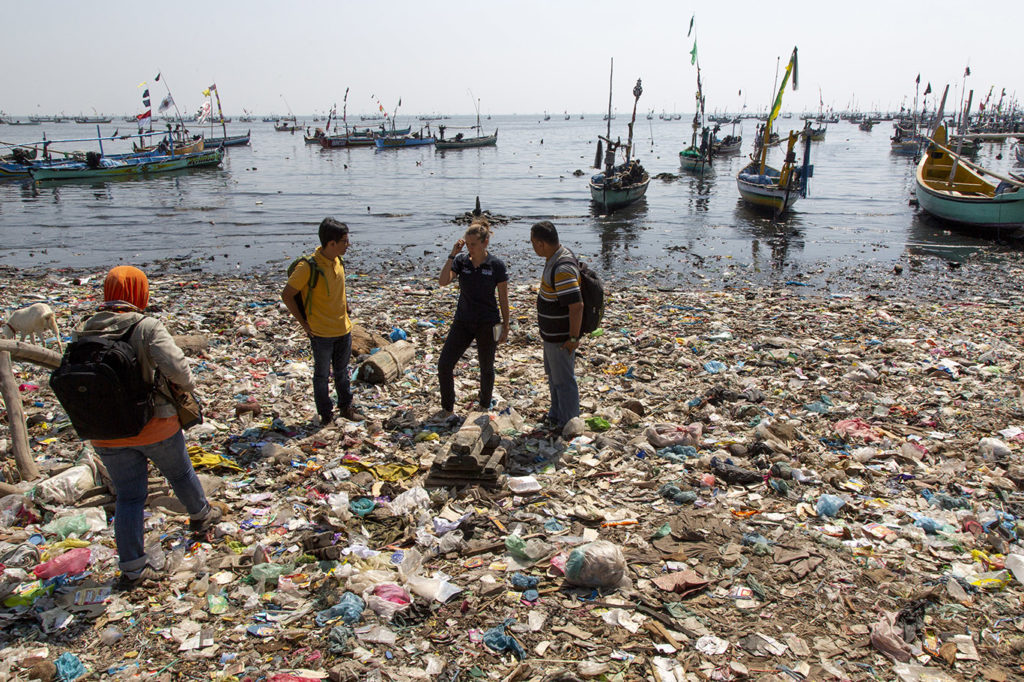 These catastrophic situations exist in most rural areas and on the many islands that make up the largest archipelago on the planet.

Private initiatives to address the lack of infrastructure

To cope with the shortfalls of means, several initiatives have been created, often driven by civil society. Indonesia, for example, saw the birth of the first “waste banks” in 2008. These banks allow residents to sell their recoverable waste. It is sorted at the source to facilitate recycling and reduce the amount dumped in the wild or open landfills that abound across the country. These “Bank Sampahs” are now fully integrated into the national waste management strategy. We visited some of them on Bali and Java.

Rumah Aspirasi created his own in Sanur ten years ago out of concern for the environment. With the help of two trucks, a few motorised tricycles and independent street collectors, he recovers 2 tons of paper, cardboard and plastic every day. They also work with village chiefs to organise paid Sunday collections for which women often take the most active part.

Mr. Indra has assembled a team of collectors within his community and found channels for some of the plastics that are found in large quantities in the Citarum River. 3 tons of plastic bags, cups and bottles are collected and resold every day.

In a suburb of Surabaya, on the island of Java, it is the Municipality that has directly appealed to a former farmer by offering him a plot of land to set up a waste management company. The municipality pays him a minimum wage, but the bulk of his income comes from what he can sell. Regarding plastics, again only bottles, cups and bags bring him interesting profits. The rest is burned directly on his land before being sent to the local landfill. It covers the rubbish collection of 400 homes. 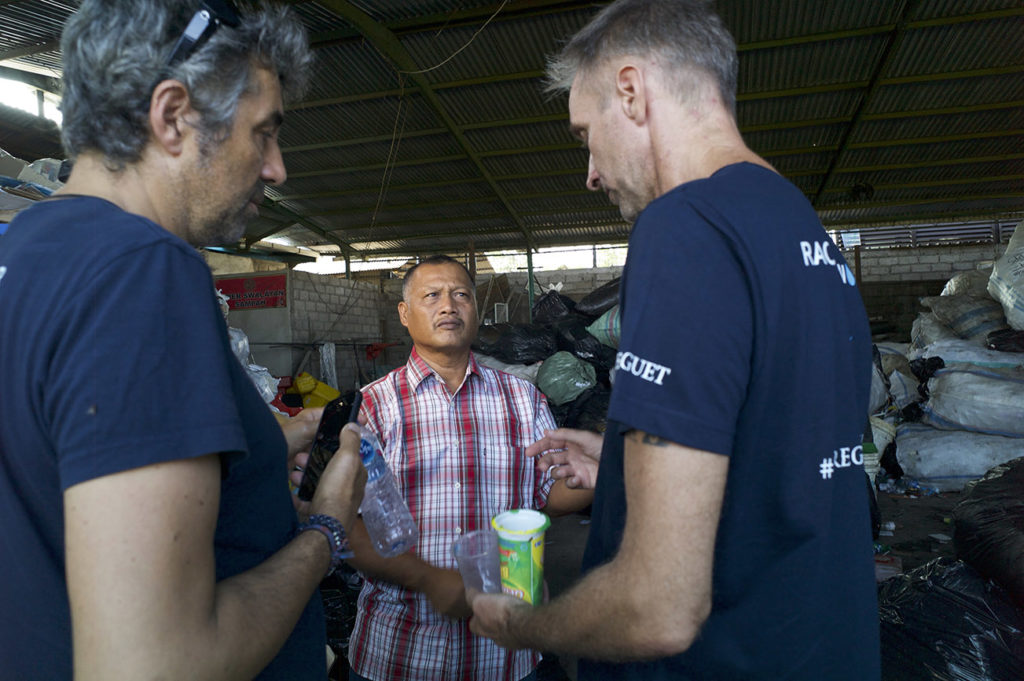 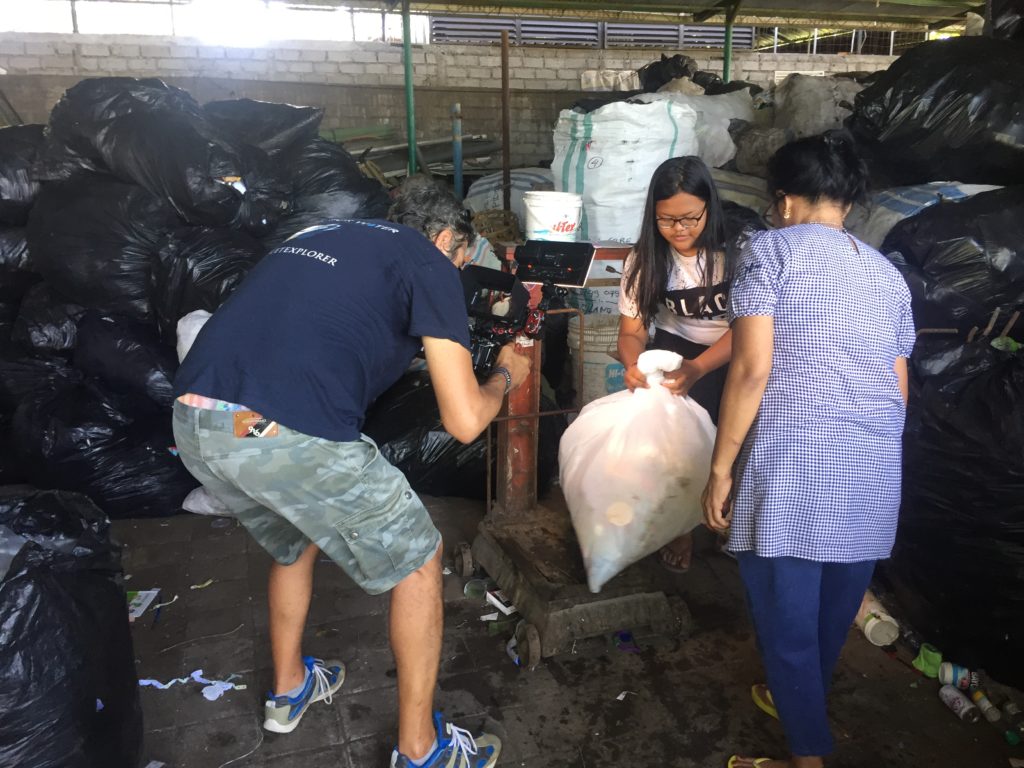 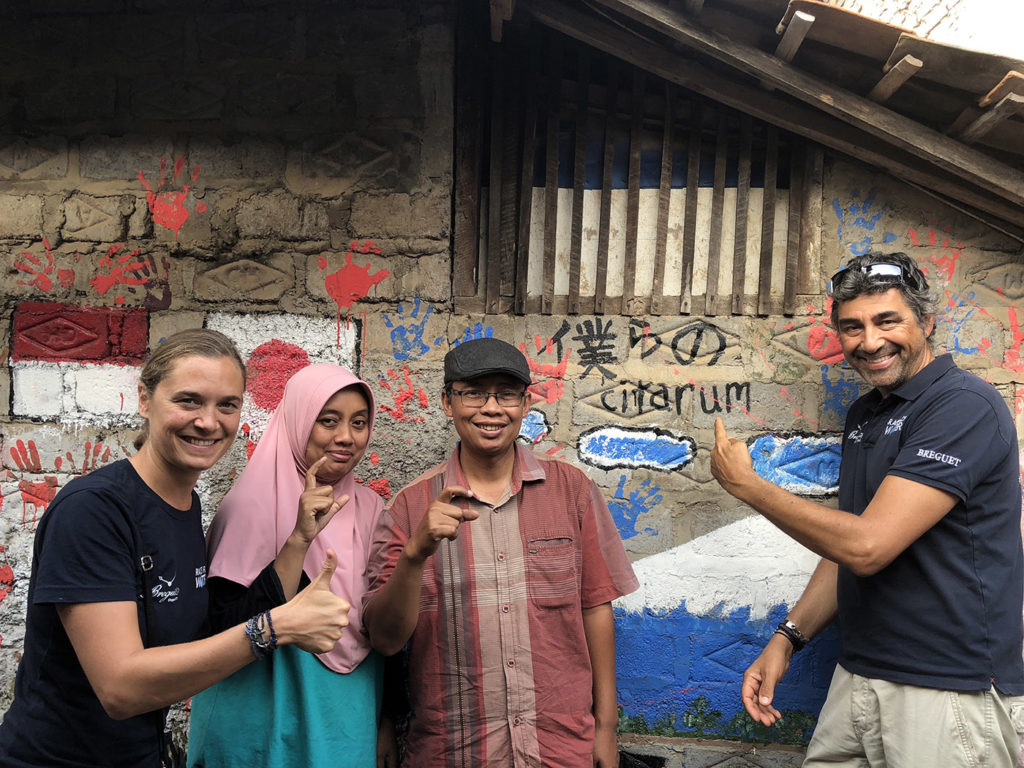 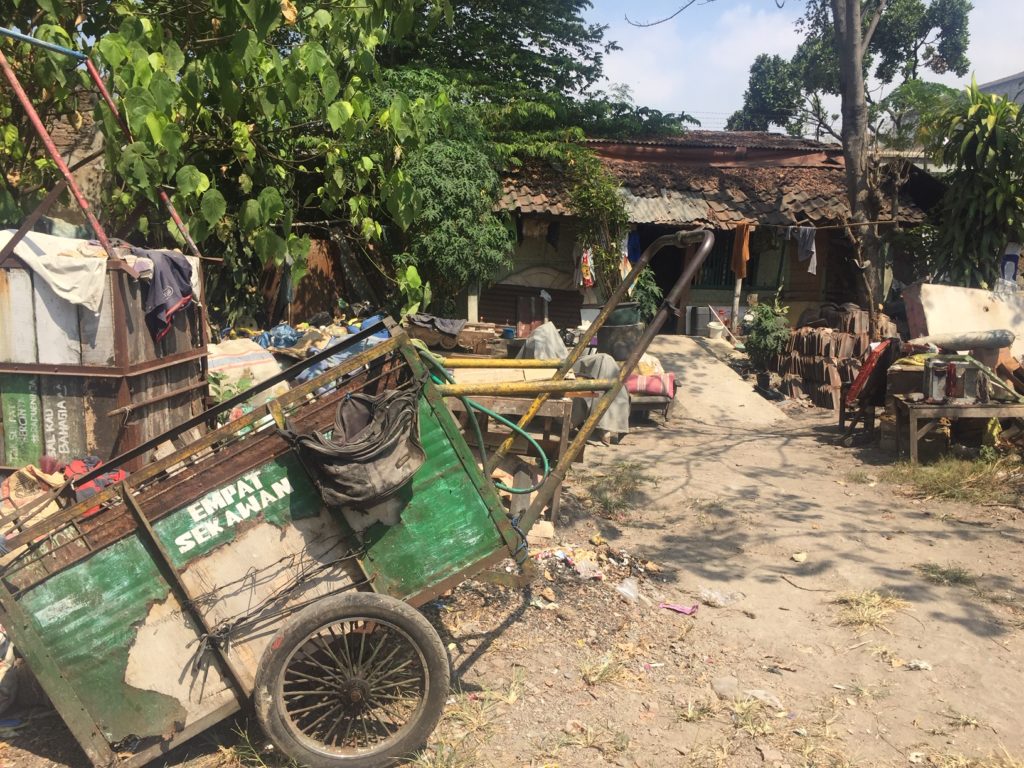 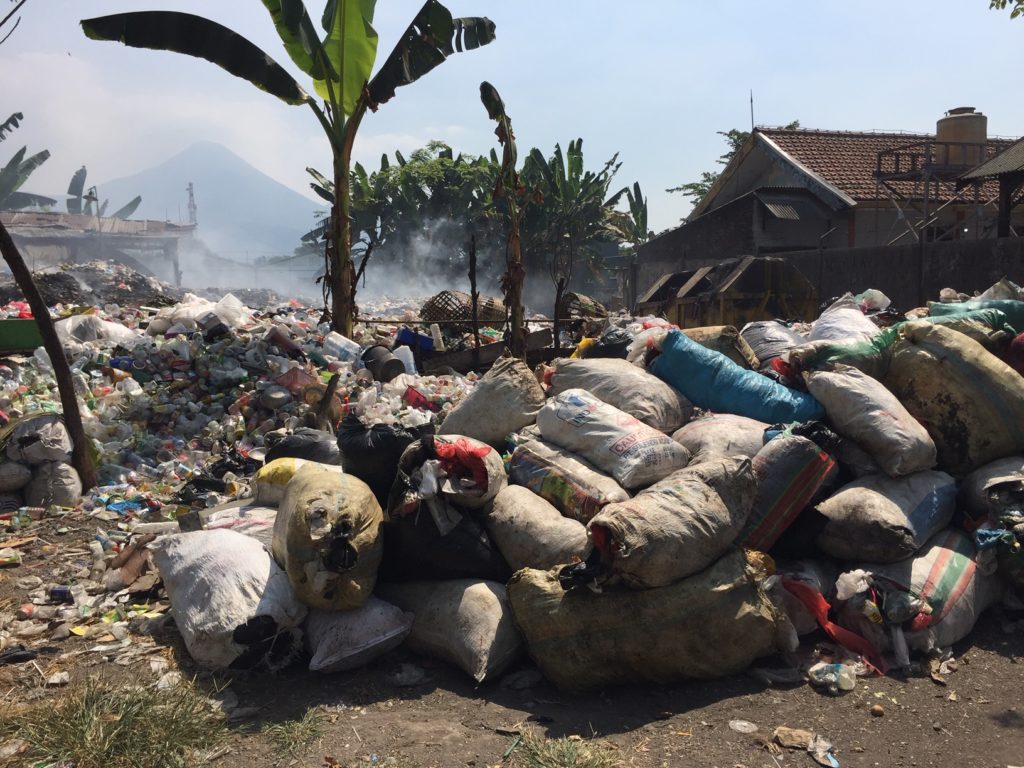 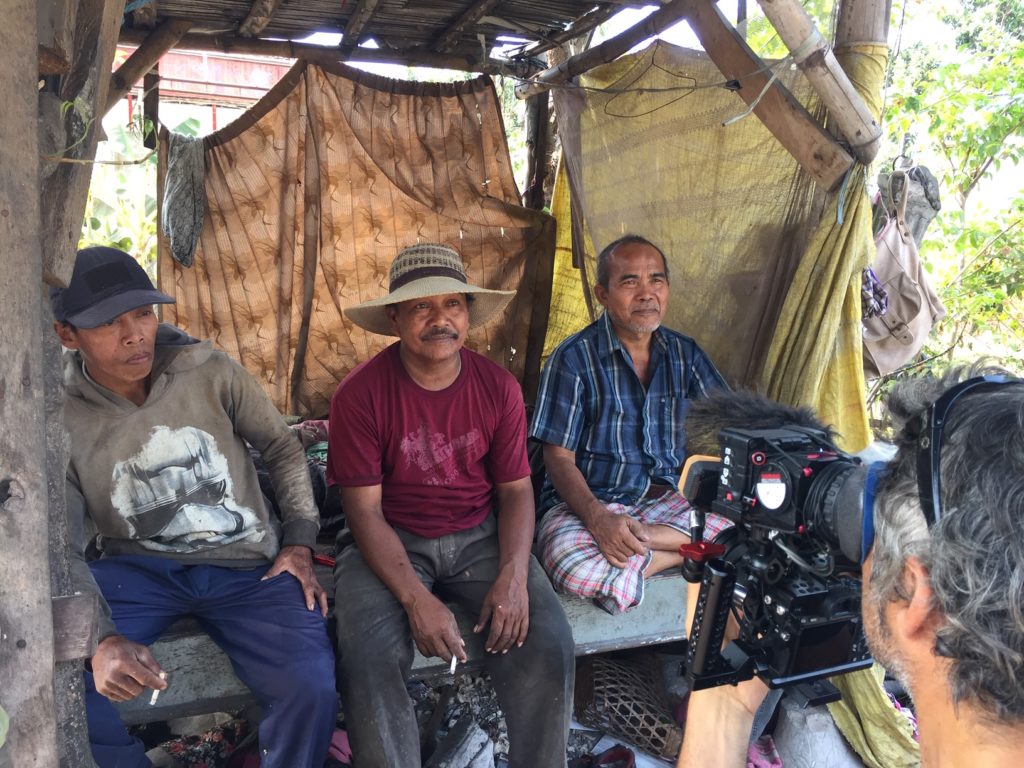 Lastly, several larger companies have emerged in recent years and are setting up more sophisticated management systems that encourage businesses and households to sort their waste at source. For example, Waste 4 Change offers a low-cost selective collection service for more than 800 households and has convinced some 30 companies to use their service. Some of them have even developed programmes to recover their packaging from their customers. This is the case of Body Shop Indonesia whose CEO Suzy Hutomo is very committed to the protection of the environment. She is one of the leading investors in Waste 4 Change and her Balinese sister company Eco Bali Recycling. In this way, 2 to 3 tons of glass, plastic and aluminium, representing 20% of the packaging of the cosmetics brand, are recovered each month for recycling.

Foreign projects are also being implemented. Such as Ministry of Waste, which focuses on waste management on the islands by seeking the most local outlets possible for maximum island waste, thus allowing its territories to be as autonomous as possible.

Or the STOP Project, an initiative of the European investment company Systemiq, which together with several plastic, food and oil companies like Nestlé, Borealis, Borouge, and the Indonesian authorities are looking for cost-effective solutions in the long term to prevent Indonesian plastic waste from entering the sea, especially for the fishing towns of South Java.

Recycling, a promising but complex sector

Profitability and outlets are the key to success in the fight against plastic pollution. Today, plastic recycling is lagging behind mainly for technical, sanitary and economic reasons.

However, Indonesia is investing in the sector. It even has companies at the cutting edge of technology.

The company Namasindo Plas is a producer of pellets, preforms, caps and cans for the beverage industry. In 2008, its CEO decided to invest in recycling in order to take responsibility for the negative impact of the packaging he produces. It took him 5 years to find the right technologies, get the necessary approvals and convince his customers to use recycled PET, or rPET, in their bottles. The first to join him is none other than Aqua, one of Danone’s leading water brands, which since 2013 has been using recycled plastic in its bottles and has just launched the very first 100% recycled bottle in Indonesia.

Namasindo is the only recycling plant in South East Asia to produce rPET in compliance with standards for the food industry.

In this sector, the sanitary standards are, rightly, extremely demanding and require substantial investments that are profitable on the processing of large volumes that must be collected. The collected material is very specific and scrupulously prepared. Indeed, for its rPET the company is supplied by 5 collection centres whose specifications are very strict. Only transparent or bluish bottles are accepted. The caps and labels are removed manually, and the bottles are crushed and cleaned without the use of chemicals. These centres work with many street collectors and waste banks to ensure their supply. 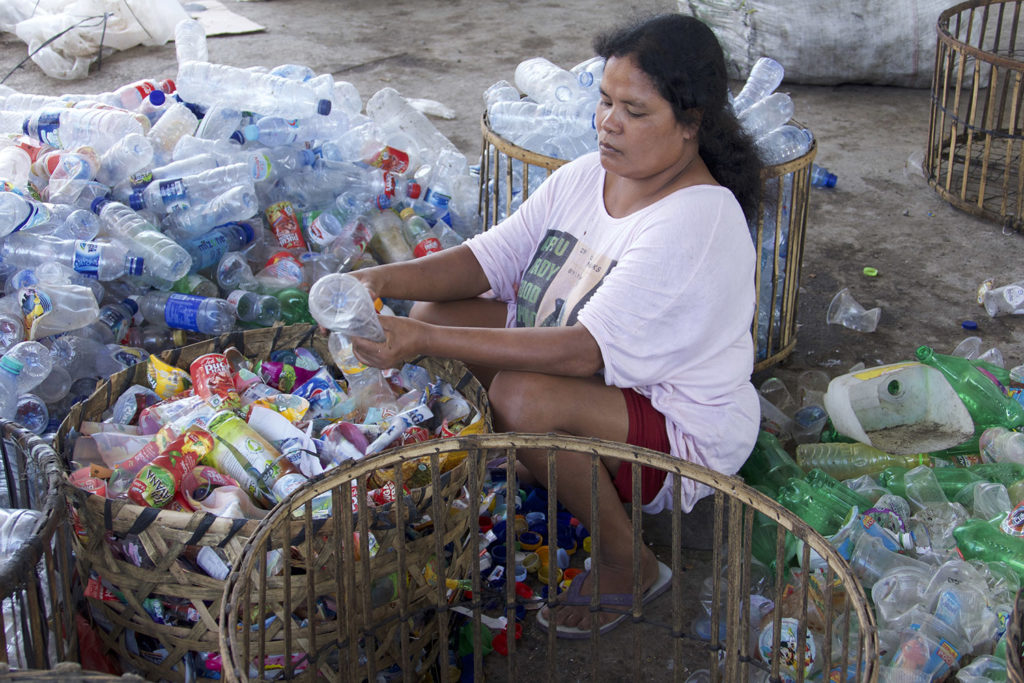 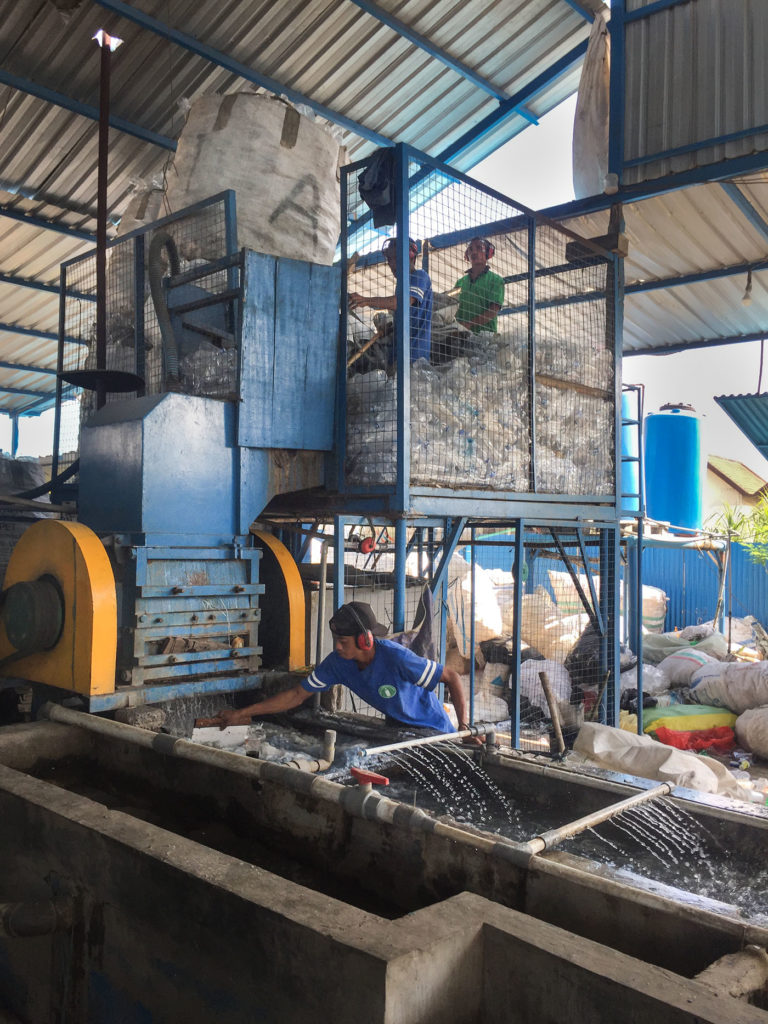 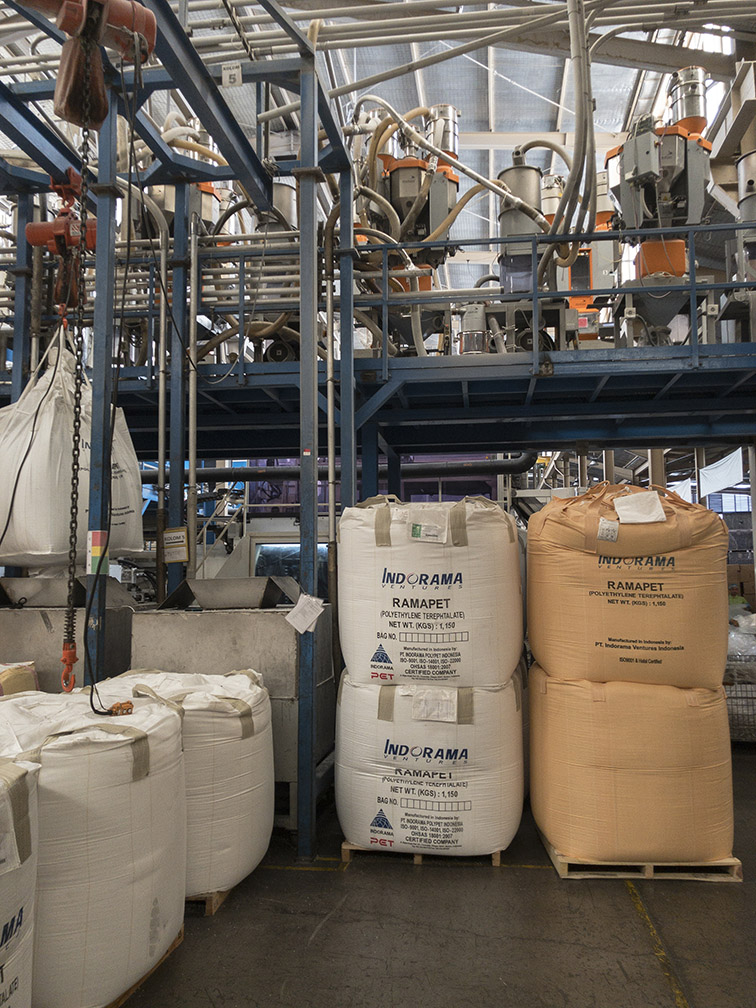 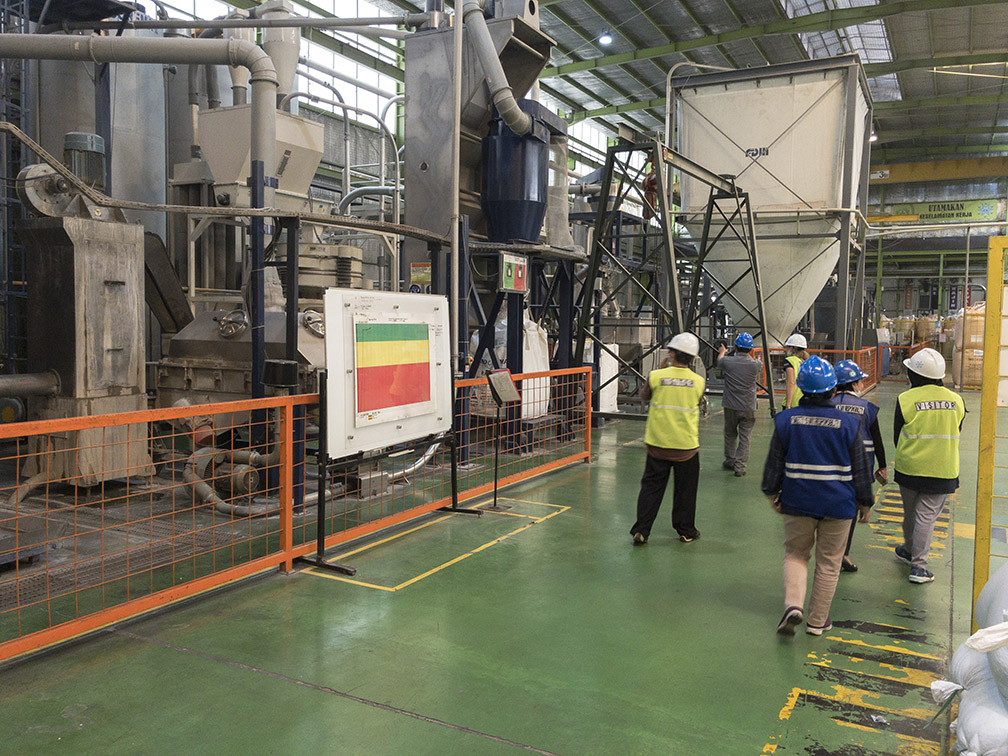 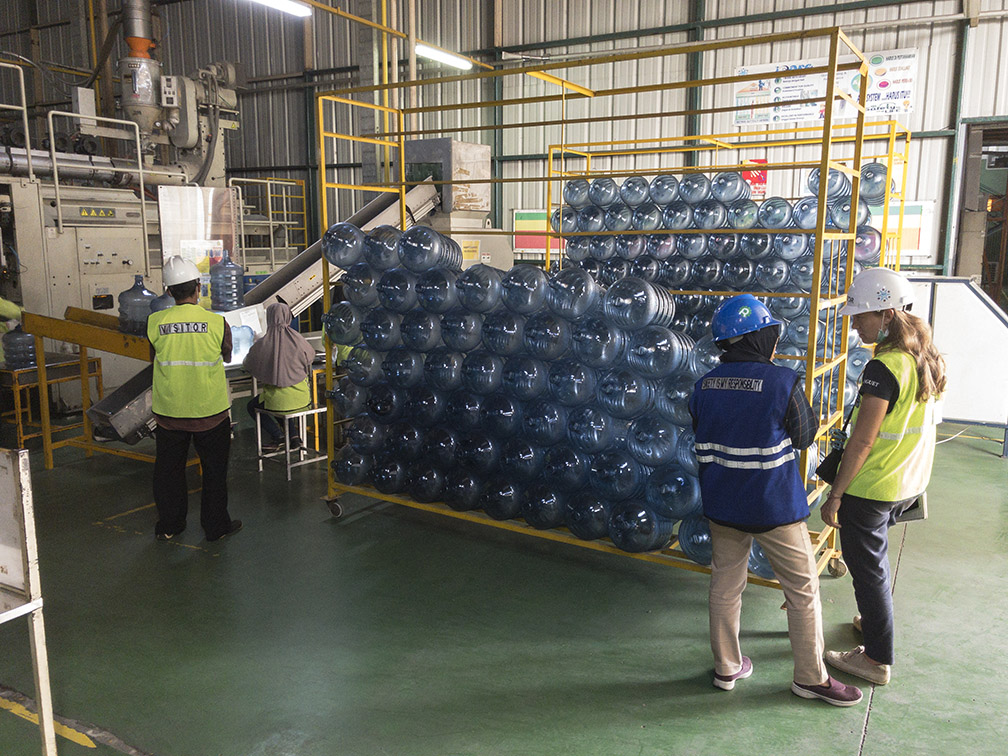 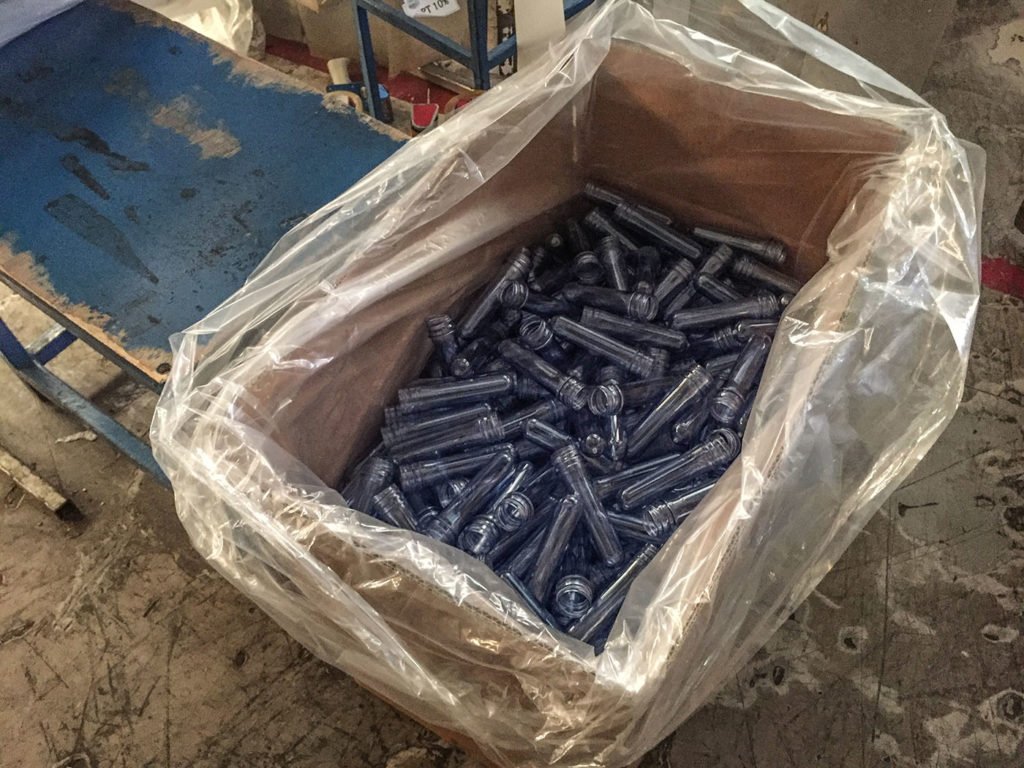 In addition, until recently the demand for rPET was low in the food industry, users preferring the cheaper virgin version. The vast majority of preforms sold by Namasindo are still composed of only 10 to 25% of recycled PET.

The requirement in the supply and preparation, as well as the production costs means that there are few producers of food industry rPET around the world. But the transition is underway. Namasindo is receiving more and more new orders. And new players are coming to the market with production plants currently under construction, particularly in Indonesia. This should increase PET bottle collection rates currently around 60% in the Indonesian archipelago.

Some recycling companies have also looked for solutions for the plastics of the least value. This is the case of Re>Pal. This Australian company buys in particular used plastic bags to transform them into 100% recycled and recyclable logistic pallets. They even buy back the damaged pallets from their customers in order to recycle them within their production cycle. Their thermo-fusion process is additive-free and allows the production of pallets with an average lifespan of 5 to 10 years, whereas the wooden pallets generally only last a few months. 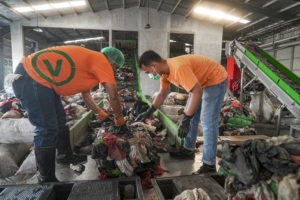 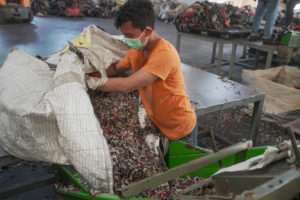 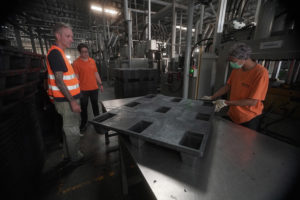 However, many plastics cannot be recycled and are therefore sent to landfills or abandoned in nature. A study conducted by Japanese experts and published in 2018 by « The journal of Material Cycles and Waste Managemet »estimates that in Jakarta, where collection and sorting infrastructures are amongst the most developed in the country, only 24% of the plastics collected are actually recycled. At the national level, this percentage can only be much lower. The plastics industry has a great responsibility today and must change profoundly to allow the establishment of a true circular economy.

Moreover, repatriating all plastics from Indonesia to Jakarta and Surabaya where the recycling plants are located does not make economic or environmental sense.

Bekasi, Surabaya, Jakarta and 9 other major cities of the country have just invested in incineration plants coupled with energy production. This will certainly unclog the mountains of rubbish that grow dangerously in municipal landfills located in the very heart of these major cities. But that will not solve the problem of suburbs, rural areas, or remote islands whose waste production in a country of 260 million inhabitants is not negligible.

To cope with these growing volumes, reducing the use of plastic is essential. Overpackaging, the multiplication of bags of products sold individually, the distribution of water in disposable cups are all examples of products that have hugely boosted the sales of their distributors (often Western), but mostly created a monstrosity of waste that we must stop at all costs.

Finally, infrastructures adapted to the territories must be developed. The Biogreen technology developed by ETIA and supported by the Race for Water Foundation provides a solution for the decentralized management of plastic waste. Biogreen is a high temperature pyrolysis system that has been optimized to transform plastic waste into electricity for medium-sized communities (50,000 to 200,000 inhabitants). Treatment volumes (between 5 and 12 tonnes per day) allow human-sized collection, which can be more easily implemented with residents, via local waste banks, and with street recyclers, and this for all types of plastics (except PVC).

During our stopover, discussions were held with several companies and government authorities which we hope will lead to the installation of pilot sites to demonstrate the relevance of the model promoted by the Foundation.

Many initiatives are currently underway in Indonesia. The country has even become a social and technological laboratory on how to reduce ocean plastic waste. This gives hope for the archipelago’s ability to overcome its plastic pollution.