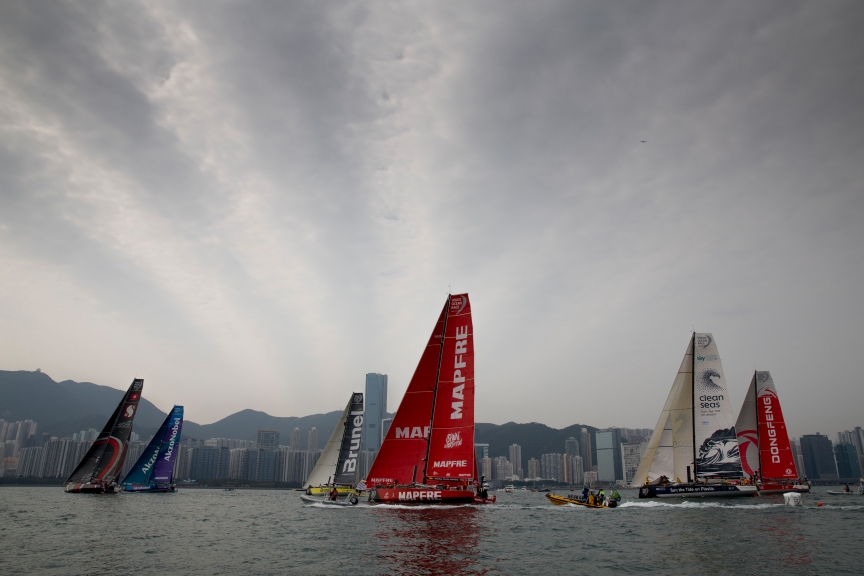 The preliminary results found 360 particles of microplastics per cubic metre in the sample from the South China Sea, an area that feeds into the Great Pacific Ocean Gyre.

The Great Pacific Ocean Gyre is one of five major gyres, driven by trade and westerly winds, which collect large concentrations of plastic debris. In total, this gyre is thought to weigh around seven million tons and is twice the size of Texas.

The previous highest levels of 307 particles per cubic metre were discovered in the area where the Mediterranean Sea and Atlantic Ocean meet.

Sailor Liz Wardley took the samples on the Turn the Tide on Plastic race boat as it travelled from Hong Kong east into the north Philippine Sea. The high readings coincided with the boat entering the Kuroshio current which feeds the ocean gyre.

Dr. Toste Tanhua of GEOMAR Institute for Ocean Research Kiel, funded by the Cluster of Excellence Future Ocean, analysed the preliminary microplastics data at the laboratory in Kiel, Germany.

He said: Microplastic particles are mostly coming from land and are passively distributed by currents that can be very local in extent. Since the race yachts are not continuously sampling for microplastic it can easily be that concentrations are very different for locations close to each other in areas of strong currents.

“The leg 6 data indicate high concentrations of microplastics close to the Asian continent, not unexpected considering the use of single-use plastics in this region.”

The route of this leg partially overlapped the track that the boat sampled during the northbound passage to Hong Kong during Leg four, providing a second sampling opportunity in some areas.

But there was a notable difference between levels of microplastics recorded during this leg compared to Leg 4 on the approach to Hong Kong from Melbourne.

The level recorded for a similar general area during Leg 4 was ~75 particles per cubic metre. The latest sample is possibly more representative of actual levels as it was taken closer to land and further northeast than the earlier sample.

Along the route south through the Pacific and crossing the equator average levels in the areas sampled were ~100 particles per cubic metre. These recorded levels also differed considerably from those recorded during the northbound passage of Leg 4 when 7 particles per cubic metre were measured. Again, prevailing currents in this offshore area will be a major factor affecting microplastic density.

Progressing south towards New Zealand the concentration increased from 45, 50, 56 to 60 particles per cubic metre in the sample closest to Auckland.

The information comes from the Volvo Ocean Race Science Programme, which has brought together an elite scientific consortium to capture data that will contribute to a better understanding of the world’s ocean and climate.

Microplastics are often invisible to the naked eye and can take thousands of years to degrade. By collecting information on their levels, the mission is helping scientists gain insight into the scale of plastic pollution and its impact upon marine life.

The Volvo Ocean Race Science Programme is funded by Volvo Cars, who are donating €100 from the first 3,000 sales of the new Volvo V90 Cross Country Volvo Ocean Race edition to support the initiative.