DIRECT DEGRADATION OF MICROPLASTICS IN WASTEWATER 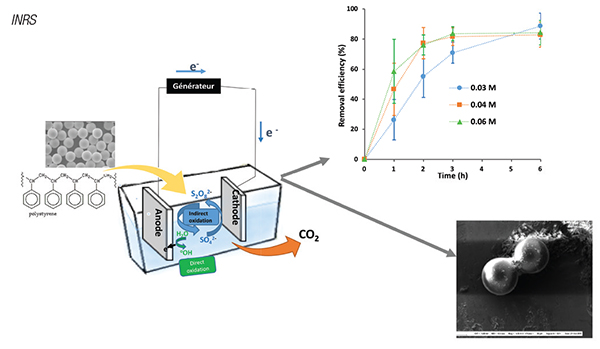 Microplastic pollutants in wastewater are notoriously difficult to treat, and can stem from many common sources, ranging from personal-care products to textiles.

Conventional treatment approaches that tackle microplastics in wastewater involve physical separation techniques without actually degrading them, meaning that further downstream processing is required. “Another advantage of this process is that it is a ‘zero-waste’ technology, and microplastics are converted into water and CO2, thus preventing the generation of toxic byproducts,” adds Drogui.

The team analyzed the performance of three electrodes: boron-doped diamond, mixed metal oxide and iridium oxide. “We found that the boron-doped diamond electrode could degrade around 90% of the microplastics in water,” notes Drogui. Furthermore, the strength of the electrocatalytic process indicates that it also works well in the presence of other contaminants. “We analyzed the performance of our process in the degradation of other contaminants present in wastewater and found that it was also effective in degrading other contaminants, including pharmaceutical compounds and detergents,” he adds. The team has completed a proof-of-concept using synthetic effluent, and the next step will be to conduct trials using wastewater coming from a commercial laundry facility, where microplastics are released into water while washing fleece garments. Following these trials, the team hopes to demonstrate the technology in a pilot-scale installation at the outlet of a commercial laundry facility. Degrading the microplastics from wastewater directly at their source of origin (such as a commercial laundry facility) could greatly decrease the processing load on the downstream treatment plants.