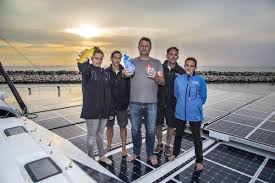 Whilst our crew  landfall on Easter Island last Friday, Diego, our Chilean scientist, who was aboard Race for Water  since Concepción give us some explanation on his experiments/observations:

Diego: “ In addition to estimating the abundance and distribution of the waste floating on the surface of the water from the deck of Race for Water, I counted the birds with binoculars.  The birds are split into two fields, that of nesting and that of dispersal. Right now, we have some excellent information on nesting, but very little on dispersal. As such, we put in place a special counting protocol, which I’m applying. I observe them for 8 hours a day for around 300 metres on each side of the boat and in front of us. In this way, I count all the birds present within this arc. I count the birds per group; if I see a single bird a first time, I have to wait until I see two together the next time for it to count! Otherwise, I would probably count the same one several times.

These birds are pelagic, only returning to land to nest once or twice a year. Their nesting peaks in November to December and lasts for around 2 months. All the information gathered is put into perspective using other data like marine currents, the concentration of phytoplankton, algae and zooplankton, as well as water temperature and lots of other variables. The aim is to understand how these seabirds are divided up.”

The scientist then expands on this, describing his operation with the special “AVANI” net in more detail, which he uses to recover microplastics in the surface water.

Diego: “At the end of each haul of the AVANI net, we rinse the whole net with sea water. At the end of this net is a collector and in this way, through rinsing, all the particles drop into the collector. The collector is then detached from the net and its contents are decanted into a plastic bottle. The bottle is only half filled and the other half is topped up with 95% ethanol. The ethanol enables the plastic to be preserved, along with all the organisms present in the haul (plankton, young fish, eggs, algae…). In addition, this enables the organisms, which have colonised plastic particles and are of particular interest to us (eggs of insects or fish, algae and small invertebrates), to be preserved. These samples will leave Easter Island with me and be taken to the Catholic University of the North in Coquimbo where they will be analysed using a magnifying glass.

The aim is to separate out the pieces of plastic from the rest of the waste and classify them by colour and size. In this way, we’ll be able to count the quantity of particles obtained for each haul, then we’ll extrapolate the density of these microparticles for a given zone, using the position reports made for each haul, as well as the assessment of the surface of the water filtered. It is also possible that we’ll analyse the organisms present on the plastic.”

A final mission on the island of Sala Y Gomez to conclude this scientific expedition:

“We collected some frigate bird nests, but solely old nests as we are at the height of nesting season. The nest is photographed and its GPS position is noted. I gather it up as whole as possible and keep it on its own. We collected around 30 frigate bird nests. Next, I searched for nests of other species and photographed them too and noted their GPS position. If there was any plastic making up these nests, I took a sample (but only of the plastic).

Together with Anne and Margaux, we also collected around 10 dead birds to examine the contents of their stomachs and see whether or not they contained plastic.

With regards to the species that feed on fish (Frigate birds, Tropicbirds and Terns) I didn’t find plastics in their stomachs, except for one frigate bird who had a small piece of fishing line measuring around one centimetre.

However, out of the 3 white-throated petrels or Polynesian storm petrels ( Nesofregetta fuliginosa ) collected, 3 had plastic in their stomach! In fact, these 3 seabirds had stomachs completely filled with particles. Given the size of the latter, there was an impressive amount of plastic and it was in much higher a proportion to what you might find in larger birds. It’s likely that it was the cause of their death.

A Sooty shearwater ( Puffinus griseus ) also had a stomach filled with plastic and it’s possible it was the cause of its death as it had an obstruction in its digestive system.

Unfortunately, we found a lot more microparticles of plastic in the stomach of the dead birds collected than in what we gathered up in our daily 40-minute net haul…

Anne and Margaux also helped me collect plastics on the beaches and around the bird colonies.

We selected the following plastics:

The most interesting were two plastic bottles with Chinese writing on. There was little chance that these bottles came from China via the sea, given that the currents don’t really carry them this way on the one hand, and also the fact that the bottles were in a relatively good condition, so they hadn’t been in the water for long. I think it was more likely related to illegal fishing in the region.”